In this Mindfulness Monday post, we deconstruct the concept of a distraction-free phone.

The smartphone is an amazing invention.

The tiny little computer in your pocket is capable of more than even the most powerful personal computer was just a handful of years ago. It really is astounding how much power is packed into such a small device.

But with great power comes great responsibility (and interruptability).

Many people look back to the release of the original iPhone as kind of the tipping point in the life of the smartphone. Sure, there were a handful of smartphone platforms then, but the iPhone has played a significant role in shaping the way people use modern-day smartphones.

But no one could have guessed that things would play out like they have.

Apple’s vision for the original iPhone

When Steve Jobs introduced the iPhone back in 2007, he introduced it as three things:

Looking back, it’s safe to say no one really knew what that “internet communications device” piece would morph into. At the time, there were no third-party apps and the App Store wouldn’t appear for another year after the original iPhone was released. It would have been inconceivable then to think that the average 16-24 year-old would spend 3 hours per day just on social media.

Which is completely fine if you intend to spend 3 hours per day on social media. But most of us don’t. In fact, if we really understood the effect social media has on us, we would probably be appalled. Numerous studies (like this one) have tied heavy smartphone use (and social media in particular) with negative moods, anxiety, and even depression. And most of us would say, “I’m not that bad. I don’t have to check it. I can stop whenever I want.” But when confronted with the cold hard facts of how we’re actually using our mobile devices, we have to face the reality that we really don’t have as much self-control as we thought we did.

It’s not hopeless though, and it’s not really the smartphone’s fault that we succumb to the gravitational pull of apps like Facebook, Twitter, and Instagram. It’s our own fault for allowing ourselves to get sucked in in the first place.

But what can we do about it?

We can challenge the defaults.

We can rewrite the rules in our favor by 1) identifying what positive uses of our technology look like, and 2) creating intentional constraints that re-enforce those positive uses while creating more friction for the negative, unintentional ones that we find ourselves getting distracted by.

For example, here’s what my iPhone home screen looks like today: 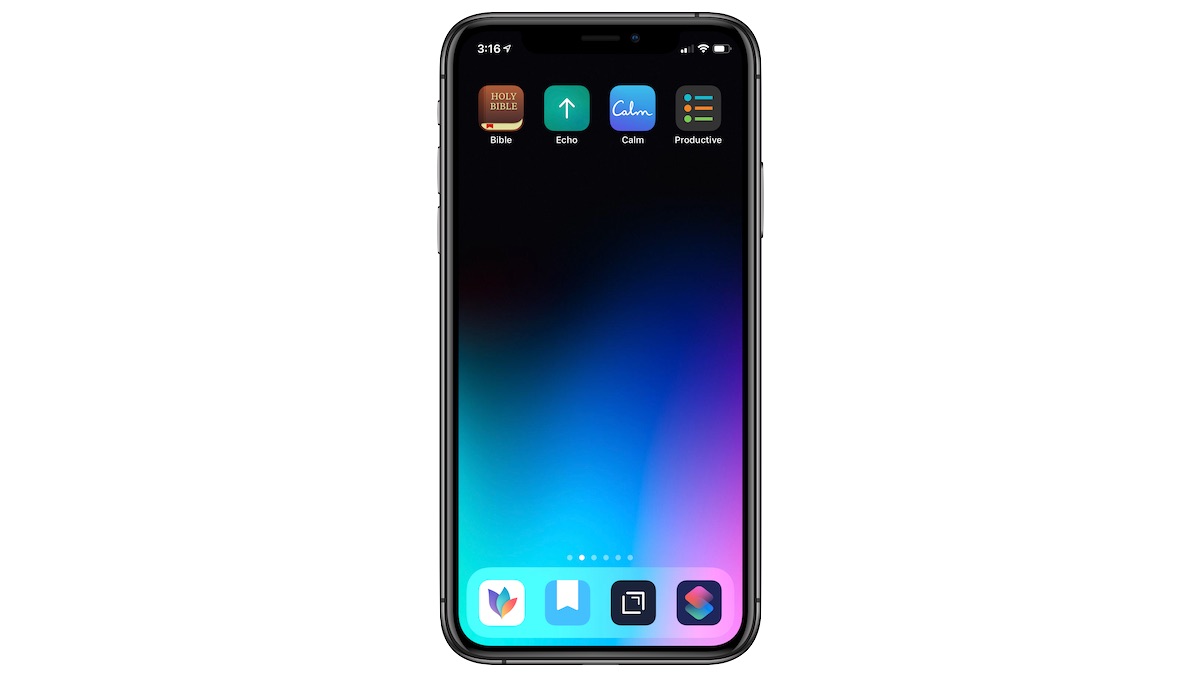 Here is a complete list of things that I do from my home screen:

All of these things I consider positive uses of my technology. They are all activities I want to encourage and reenforce. By removing everything else from my home screen and dock, I am making those desirable activities easier. At the same time, I’m making the things I want to avoid (checking email, surfing the web, etc.) harder by removing the visual trigger. By intentionally adding friction to those actives I want to avoid, I am making it harder for myself to get sucked into them.

In other words, I am building a distraction-free phone.

What is a distraction-free phone?

A distraction-free phone is not a “dumb phone” (although there’s nothing wrong with that approach if you think it would help). It is simply a phone where you have dictated the terms of engagement and all your apps and notifications play by your rules.

A distraction-free phone is really about what’s not on your phone. Rather, it’s about intentionally choosing the things that make the cut. It’s about only having things on your smartphone that are in alignment with your vision and values about how you want to use your device. Want to get into a reading habit? Keep your Kindle app. Wish you journaled more? Put Day One front and center.

What’s great about this is that you get to decide what you want here. If you really get a lot of value out of using Twitter, go ahead and keep it on your phone — it’s completely up to you — but do get rid of all the things that don’t help facilitate what you define as positive uses of your technology.

The mantra of a distraction-free phone is less but better. Replace the large amounts of unintentional usage with specific things that you want to do more of.

PS: This is where (we hope) The Sweet Setup really helps. Our goal is to help you find the best apps for your iPhone, iPad, and Mac. By having fewer, higher-quality apps on your smartphone, you can leverage your technology in a positive way and hopefully avoid the rabbit trail of the perpetually new and shiny object.

How to create your own distraction-free phone

I first heard about the concept of a distraction-free phone from the book Make Time by Jake Knapp and John Zeratsky. I’m sure others have talked about this idea too, but Jake’s story about how he had his moment of clarity while playing with his kids really struck me when I read it. I immediately knew that I needed to do something similar. I needed to do something about the digital doorway to distraction that was always in my pocket.

If you want to change the defaults around how you interact with your smartphone, here are a couple of suggestions to help you drain your own infinity pools (the endless feeds that call to you).

You don’t have to go through all of these steps if you don’t want, but I do challenge you to pick at least one to try, even for a short trial period. Just try deleting social media or news off of your phone for a week and see how it goes. For many people, even a couple of hours is enough time to feel more freedom and less stress.

Download: We spend an inordinate amount of time sorting through hundreds of apps to find the very best. This list of must-have productivity apps includes app links, quick-start info, and pro-tip workflow recommendations for each app.