When it was announced during the September iPhone event, I immediately thought that the sixth-generation iPad mini was the star of the show. New iPhones are cool and all, but this iPad mini seemed like it was tailor-made for how I was (and wasn’t) using my iPad Pro. I ordered one before the end of the event, and having used it for a month now, I have to say this is by far the most fun I’ve ever had with an iPad. 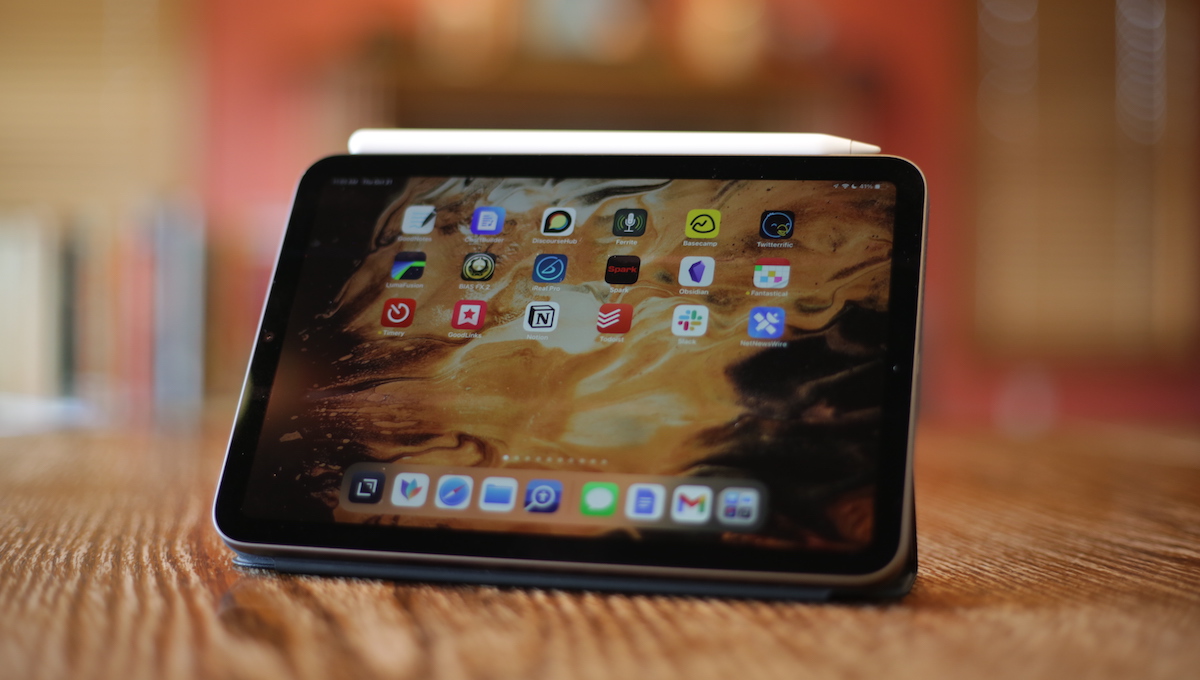 And more importantly, it has completely absolved me of my iPad guilt.

I’ve used some version of the iPad Pro from the moment it was released. It is an absolutely screamin’ machine, and it’s kind of wild to think about how capable and powerful a thin slab of glass can be.

One example is writing. I’ve had a version of Apple’s keyboard case attached to my iPad Pro since the original keyboard folio for the 10.5″ model, but I don’t enjoy writing on it. Can I do it? Absolutely. But given the choice, I’d rather use my clicky keyboard (or even my MacBook Pro).

Another example is any kind of multitasking. Even though iPadOS has advanced in recent years, I still want to use my Mac if I need to have multiple windows open at once (which I often do for a lot of my admin tasks).

This left me in a weird place of not wanting to use my iPad for my “real work.” Even though I create sketchnotes videos every week, I felt like I was not using the iPad the way it was meant to be used. I felt like my use of it was only a small percentage of what it was made for, and I felt more and more resistance when trying to justify an upgrade based on my limited use.

Yes, it’s great for audio editing and taking sketchnotes, but I was increasingly hesitant when considering spending $1500+ on a new iPad (and accessories) if I’m not going to use it “the right way.”

I was starting to think that the iPad just didn’t have a place in my life anymore. I couldn’t justify the high cost for a powerful “computer” I was going to primarily use as a notebook.

I was suffering from iPad guilt.

But the iPad mini has significantly improved my relationship with the iPad.

And with the lower price, I don’t feel like the iPad needs to be capable of absolutely everything in order to justify a place in my personal workflow.

I can simply let the iPad mini do what’s it’s good at. And as I do, I’m finding my usage of the iPad has drastically increased in the last month.

How I’m Using the iPad mini

When I first saw the iPad mini announced, I immediately thought that it would be the perfect tool for my sketchnote workflow using GoodNotes.

It has not disappointed.

I LOVE the roughly A5 size of the iPad mini. It feels very natural for me. In fact, the iPad mini is almost identical in size to my Ugmonk Heirloom journal: 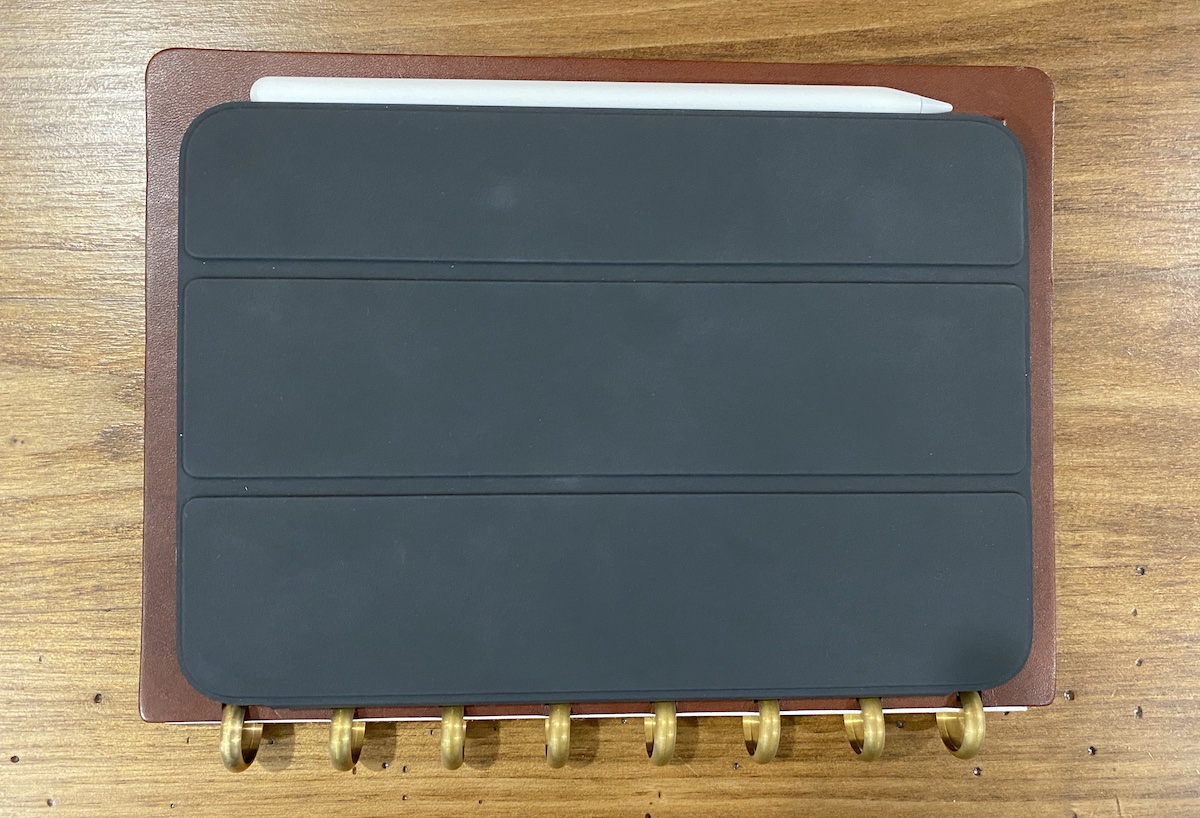 Even though I primarily work from home, I always have my notebook with me. The size of the iPad mini makes it easy to grab as well.

I also enjoy mind mapping on the iPad mini using MindNode, though not much has changed here since my move from the 11″ iPad Pro. Being able to physically touch your ideas and move them around feels magical on any device, and the small screen (or canvas) hasn’t bothered me.

I also use my iPad as a teleprompter using OBS for presentations and Zoom meetings (details can be found at the bottom of this post), and I was concerned the smaller screen size might be an issue. But this has been completely fine and the smaller size of the iPad mini makes it a little bit easier to position it correctly.

One area where I do miss the larger size is for sheet music. I play guitar on the worship team at my church and use scanned documents in GoodNotes for my sheet music. I pair an AirTurn Bluetooth pedal that allows me to turn pages without touching my iPad. If I’m going to see the entire document at once, the iPad mini screen size is honestly a little small. But since I try not to look at my music anyway and use it only for reference, it isn’t that big of a deal. And when my iPad occasionally goes to sleep (seems to happen irregularly regardless of settings), it’s much easier to wake it back up using TouchID on stage than FaceID.

I’ve also found some new uses for the iPad in my workflow. The most surprising one to me has been using it for journaling in Obsidian. I have a very particular workflow for this (which I document here and here), which I expected I would do from my iPhone at the end of the day. But it’s never really felt quite right on the iPhone, and the smaller size of the iPad mini means it’s usually nearby and I’ve found that I really enjoy using Obsidian on the iPad mini.

I also enjoy using the iPad mini for research and podcast prep. The iPad Pro felt big and cumbersome, but I love sitting on the couch and prepping show notes with my iPad mini using Safari and Google Docs in Split Screen.

There are also a couple of workflows that I have ended up moving from my iPhone to the iPad mini. Communication for work, which usually happens in Slack or Notion, is much more pleasant for me on the iPad mini. And with the screen size so similar to dedicated e-readers like the Kindle, it’s pretty obvious that it’s a great reading device because it’s so thin and light. While I still prefer to read physical books, I’ve found that I love using the iPad mini for reading RSS (and newsletters that I send there using FeedBin).

In short, the way I’m using my iPad mini is very different from how I was using my iPad Pro. But I also end up using it a lot more than I ever thought I would.

What I Love About the iPad mini

The benefits of the iPad mini for me go far beyond the technical specs. Here’s what I love about it:

There are a couple of things I miss though from my iPad Pro:

Overall, I absolutely adore this little device. It’s made me fall in love with the iPad again. No, it’s not perfect — but it is perfect for me. Some people may prefer FaceID or miss the higher refresh rate more than I did. But those features come with a cost, and I feel the tradeoffs Apple made to keep the price down are the right ones.