Last week, the Postbox team released version 7 of their Mac email client. There’s a lot to like in this new version, but the thing that stands out to me after using it for about a week is just how much more solid everything feels. You can tell the team put a lot of work into the polish of the app, and there are lots of little things that have been tightened up in the app so that it just feels better. 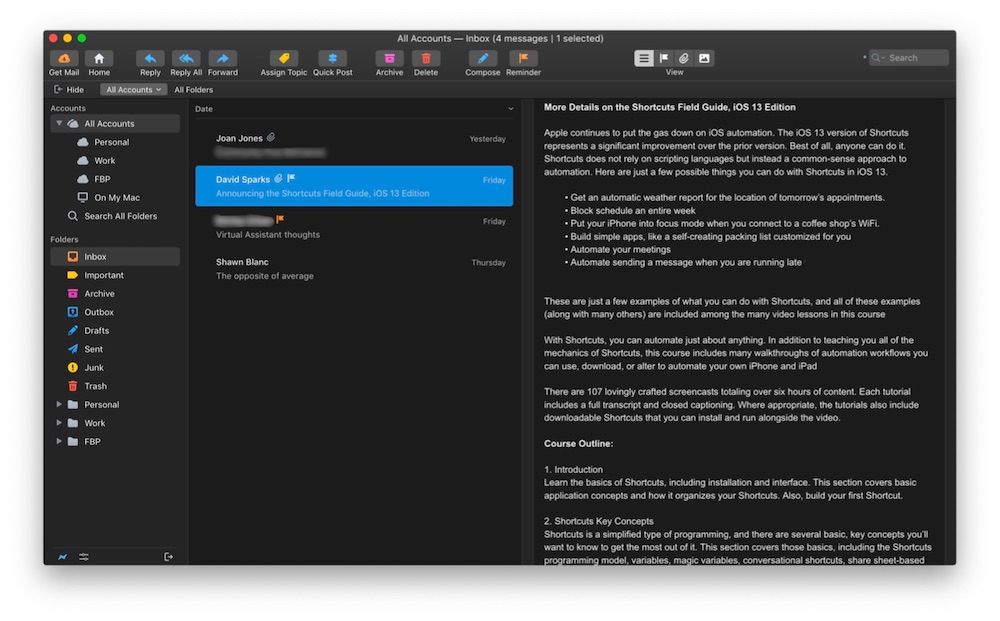 Postbox 7 also got a facelift and now offers 20 themes to choose from. I’m usually pretty picky about the themes I use in my apps, and often find only one or two that are usable and don’t drive me crazy. But that isn’t the case with Postbox. The themes range from very light to very dark, but they all look really good. I personally like the Dark theme, as it fits in very well with the Dark Mode on macOS Mojave or later. All 20 themes also change the appearance across the entire app, as they also include message preview and compose windows.

Make no mistake, Postbox is still a very powerful email client. For example, one of the unique features that Postbox sported previously was the ability to fully customize and send HTML email from within the app. This allowed you to create newsletters, brand templates, or company email stationery, but many people don’t want to mess with pure HTML if they don’t have to. So in version 7, Postbox gives you a library of pre-made “clips” that make this a lot easier. The Clips library includes everything from custom bullets to callouts and tables, and can be inserted wherever you want the element to appear in your email.

There’s also a new Labs feature that allows custom code to be added to Postbox that extends the functionality of the app. Unlike the Add-Ons which are a simple installation process, Labs is literally bolting on additional third-party code. It’ll be interesting to see developer support for this since Postbox won’t support Lab features directly, but it does open up interesting possibilities. For example, the first Labs project announced will bring OpenPGP support to Postbox, allowing you to encrypt the email that you send.

All of this is in addition to an already incredibly powerful email client with several unique features, like one-click unsubscribe, Pre-Made responses (like Canned Responses in Gmail), and Quick Post (which allows you to pre-configure the email send-to services that many popular productivity apps use). My personal favorite is Domain Fencing, which makes sure that you don’t accidentally send a work email from your personal account (or vice versa).

The developers are also very responsive, and the app continues to get better at a rapid clip. From the time I wrote the first draft of this post to the time it publishes (~4 days) they released an updated version that incorporated feedback I submitted about making it easier to add smart folders from the Action Bar below the Folders Pane. It may be an outlier, bu it’s incredibly refreshing to see passionate developers who not only listen to but incorporate feedback from customers so rapidly in an effort to make their app even better.

For full disclosure, I did actually work with the Postbox team on creating some help videos for the app in the past, but my personal email client of choice for years has been MailMate and I didn’t list Postbox as a recommendation initially when I updated our pick for the best third-party email client for the Mac. I always felt that the app was powerful, but some parts of the app were a little buggy and there was so much there that it sometimes felt like too much. But I have to say that my opinion has changed as I’ve used Postbox as my main email client for the past couple weeks. I haven’t encountered any weirdness and I have no reservations about making version 7 my email home.

The email app landscape has shifted a bit too since we last updated our best third-party email client for the Mac, with Airmail botching a transition to a subscription model and many other email services dealing with privacy snafus. Postbox is also now a subscription, albeit a fairly affordable one at $29.99/year (less than Airmail and less than half of a paid Spark plan). It’s still not going to be for everyone, but if you 1) want complete control over your email and 2) use email primarily on your Mac, Postbox is definitely worth a look.