One of the things that was announced during this week’s WWDC Keynote presentation was sleep tracking for the Apple Watch. The feature has long been rumored, and is finally making its way to the watch in watchOS 7. 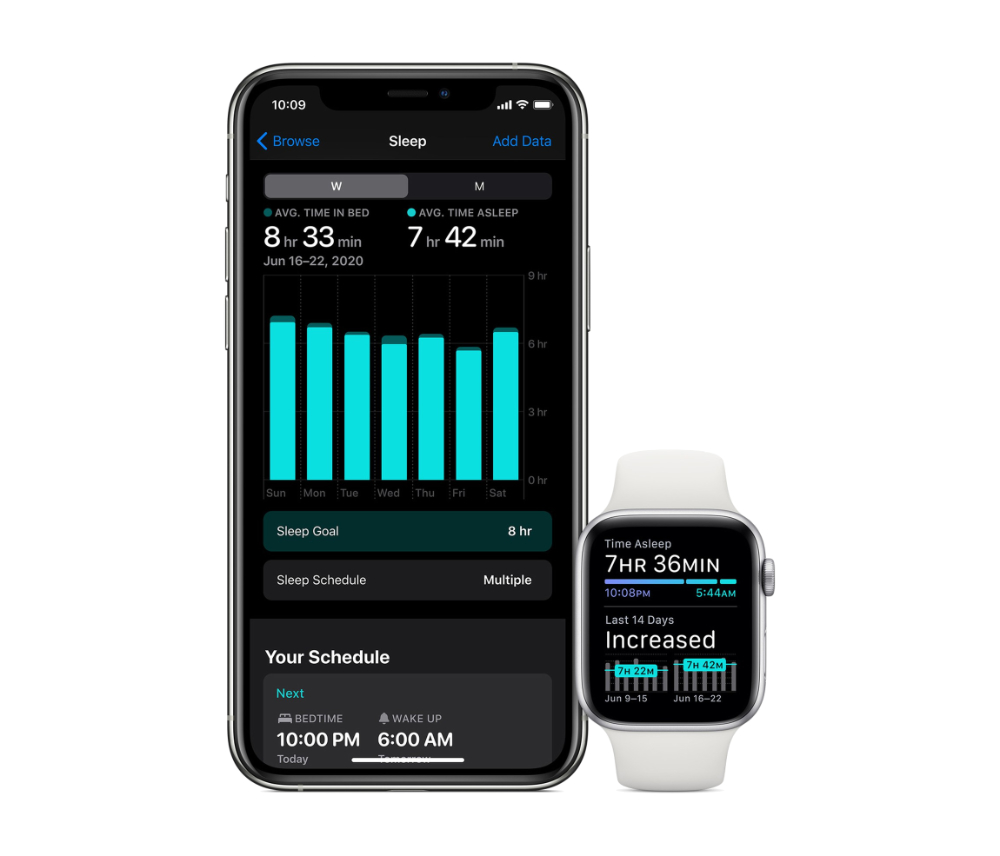 Let’s take a look at how it works and why it’s so important.

Why Sleep is Such a Big Deal

Lack of sleep is not just a productivity killer. It can be downright dangerous. Being awake for too long is similar to being under the influence of alcohol. It impairs your judgment, causes weight gain, decresases your attention span, makes it harder to focus, ages your skin, and decreases logical reasoning. So it’s no wonder people are prioritizing sleep to make sure they are at their best.

But for me, it goes even deeper.

When I was 18, I had a seizure standing in line at a McDonald’s. When I came to, the doctor told me that I had epilepsy (from my grandmother) and I would have to live with it the rest of my life.

I’ve been very fortunate because my quality of life is not impacted significantly, but since a lack of sleep is one of the things that can trigger a seizure, it has made me very aware of my sleeping habits. I do my best to make sure that I am 1) getting enough sleep, and 2) getting the best sleep I can.

But even if you don’t have a medical condition, maximizing the quality (and quantity) of your sleep is always a good idea.

Needless to say, I’ve been anxiously looking forward to Apple adding sleep tracking to the Apple Watch for a very long time.

When you go to sleep, your body actually goes through several sleep cycles. Sleep cycles are kind of like a biological oil change that keeps your body running properly. When you don’t get enough sleep, the system starts to break down. You may get away with it for a little while, but it will catch up to you eventually — like a car engine that seizes after you don’t change the oil for too long. The difference here is that your body needs this oil change every single night.

There are several stages to a full sleep cycle:

The general rule is that the more REM sleep you can get, the better rested you are. But unfortunately, you can’t just enter REM sleep. You have to go through all the different stages to get there, and then your body reverses the process and goes back up again. The whole journey from Stage 1 to REM and back up is what makes up a “sleep cycle,” and this whole process usually takes about 90 minutes.

Sleep Tracking on the Apple Watch

Now that we understand sleep, let’s look at Apple’s implementation of sleep tracking. Let’s start with the good.

Apple has added a feature called Wind Down which assists you in establishing a bedtime routine. It can launch shortcuts and home automations that help you relax and make it easier to fall asleep once your head hits the pillow.

In my opinion, this may be the most under-appreciated announcement from Apple’s sleep tracking demo.

You may be different, but for me, sleep doesn’t just happen. Unless I am physically and mentally exhausted by the time I go to bed every night, I need some time to transition. Turning down the lights, listening to some chill music, writing in my journal, and reading are all things that I do as part of my evening routine to help me go to bed on time and wake up the next day feeling refreshed. So I really like how Wind Down can help you get there by automatically triggering things to get you ready.

I do think some people who are used to using their devices until the moment they fall asleep will be annoyed by this. But from a health perspective, it’s a big plus.

The new haptic alarm mode is a welcome addition. While new, gentler wake up sounds are great, I’ve been using a haptic alarm with the Sleep Cycle app for awhile now and I absolutely love it. I was a little skeptical that I could be woken up by a haptic alarm only on my wrist at first, but it’s been working well for me.

This is even more important if you share a bed with someone who doesn’t have the same schedule as you. I tend to get up before my wife, and she’s a much lighter sleeper than I am. So if I use any kind of audible alarm, it’s guaranteed to wake her up too. With the haptic alarm on my Apple Watch, I can start my day silently without interrupting her sleep.

Even though it’s a great start, I see some problems with Apple’s implementation of sleep tracking. Here’s what I think is still missing.

Based on the information I’ve seen, it looks like Apple’s sleep tracking will display the amount of time you spent sleeping in the Health app.

That’s good, but it’s not enough. (It’s also already there if you use a third-party app to track sleep.)

As I mentioned earlier, sleep happens in cycles. A night where you sleep 9 hours but are woken up every hour (for example, by a young child who’s not feeling well) is not the same as getting even 6 hours of straight sleep. You need time to go all the way down into REM sleep (Stage 4) and back again for your body to complete the cycle.

Understanding how many full sleep cycles you’ve gotten is an important aspect of analyzing your sleep. Apple’s sleep tracking gives you the quantity, but not the quality. This is a little bit baffling to me because 1) it’s really important in my opinion, and 2) other apps have been doing it for years. Here’s what it looks like in Sleep Cycle today: 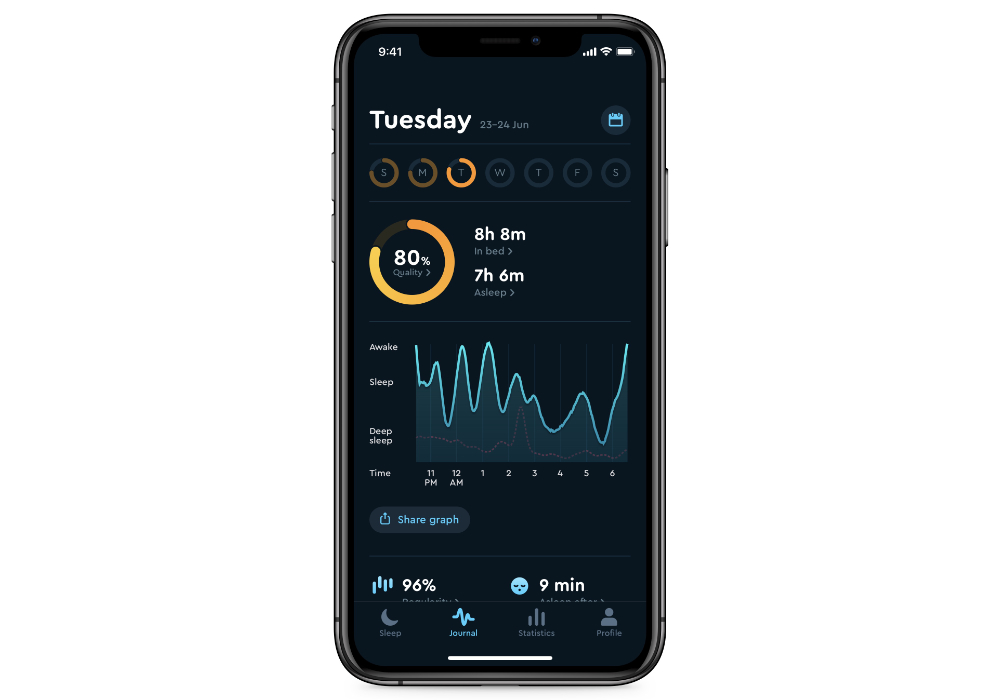 This is frustrating to me because I personally believe the Apple Watch may be Apple’s most important product. With all the emphasis on health, I’m not exaggerating when I say my Apple Watch has significantly changed my life for the better.

But without tracking sleep quality, this feels a little bit like a token gesture.

No Wake Up Window

The way other apps try to help you get the best possible start to your day is by offering a wake up window. Basically, you set a time period, and the app that analyzes your sleep picks the point during that window when you are in the lightest stage of sleep possible. Then (and only then) does it actually trigger the alarm.

Maybe you’re naturally a morning person and you don’t believe this really makes a difference, but I’m not. And I can tell you, it does (for me at least). The absence of this feature is probably enough for me to stick with a third-party app for now.

To be honest, I’m not surprised that this feature isn’t there at launch. This feels a little more advanced and can be a little confusing to explain to the average iOS user. But, I do hope it comes eventually.

I remember when Apple brought Night Shift to the phone to shift the colors on your screen in an effort to eliminate blue light before bedtime. It’s still not as effective as something like f.lux (the Mac app that has been around forever that does a better job), but it did make millions of people aware of the effects of blue light. And it at least did something to help those people.

I think Apple’s implementation of sleep tracking does sort of the same thing. It doesn’t do it particularly effectively if you’re really serious about this stuff, but it does bring the concept of sleep tracking to front of mind for millions of people who wouldn’t have considered it otherwise.

For many people, it’s a great first step. If you’ve never tracked your sleep before, start with Apple’s built-in sleep tracking in watchOS 7. It’s already there, and it’s completely free to use. For sleep snobs like me, it’s likely not going to be enough to cause you to drop better, more powerful (but sometimes costly) third-party implementations just yet.

We're big fans of Things, OmniFocus, and all sorts of task managers here at The Sweet Setup. While the task manager app is certainly an important choice and cornerstone of any healthy GTD practice, it's also less important when compared to the practice itself. While we've already written the proverbial book on using Things for managing your tasks, we're also keenly interested in how other task managers accomplish similar goals and meet the needs of millions of people across the globe. »

A Beginner’s Guide to Craft: Linking

Blocks are the very core of Craft. They provide countless ways to format, structure, and build out your documents. They can take numerous forms, from text, audio, video, PDFs, sketches — there is very little Craft can’t handle thanks to its block-based system. »