Ulysses version 18 is out today with support for the new iOS 13 Dark Mode as well as the new system Split View on iPad. This new version is free for existing subscribers, and while it doesn’t add a ton of new headlining features, it contains some very important changes for the future of the app in the post-iOS 13 era.

While Ulysses has long had a beautiful Dark Mode, it required some changes to play nicely with the new universal system feature in iOS 13. You no longer need to manually toggle Dark Mode from inside the app, as Ulysses will now instead respect the global preference as well as adjust based on the scheduled appearance switch (e.g. “sunrise until sunset”).

Ulysses also removed its own proprietary iPad Split View feature to switch to the new system Split View in iPadOS. If you’ve used the Ulysses Split View previously, you may not see many differences because the new system functionality in iPadOS is very similar to the proprietary feature that it replaces. But one of the advantages of using the native framework is the ability to open multiple windows in spaces, so users can work on several projects and easily switch between them. If you use Ulysses as your main work machine, being able to set up multiple spaces is a welcome addition. One example I personally like is the ability to open up multiple windows that allows me to keep the sheet for the article I’m working on in one window with my outline or notes in the window next to it.

One new feature that was added in this release is the ability to keep files in Dropbox. There has always been the option to save texts in external folders outside of your Ulysses library, although the options were a little limiting. With version 18, users can now save Ulysses files in external folders (though only in Dropbox on iOS) and all of Ulysses’ advanced features will still be available: annotations, writing goals, keywords, notes, and image attachments, to name a few. 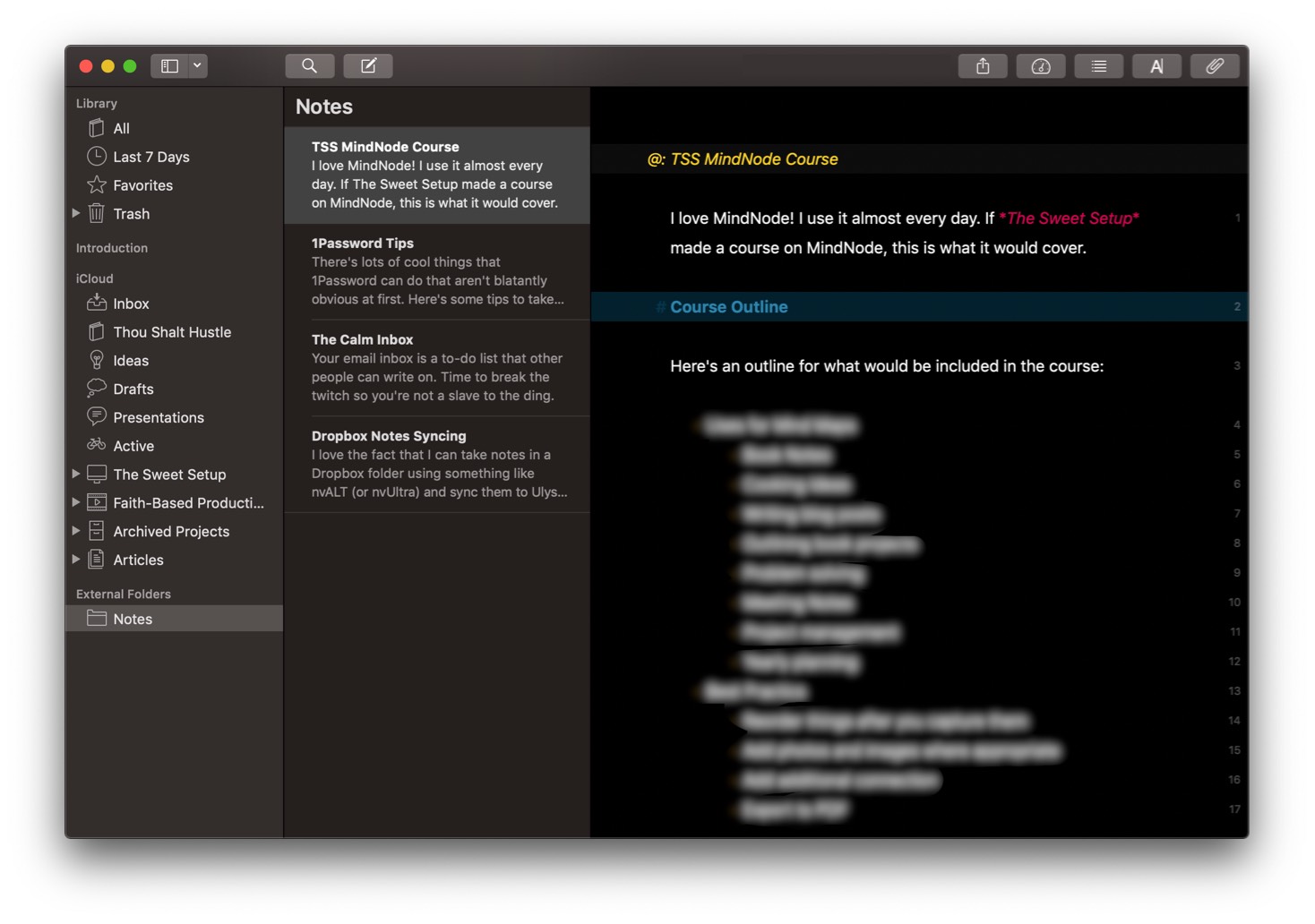 I’ve long wanted a true sync with an external folder in Ulysses because for years I’ve used nvALT by Brett Terpstra (and more recently, the nvUltra beta) to quickly capture plain text notes into a Dropbox folder on my Mac. Now, I can use nvUltra to quickly capture an idea in plain text on my Mac, then develop the idea into a blog post and even publish it directly to WordPress from Ulysses. The whole process feels a lot more seamless, as I don’t have to move the note anywhere until I’m actually done with it, but I can still take advantage of all the Ulysses markup features.

Overall, version 18 is a significant update that may largely go unnoticed. The fundamental changes that were made in version 18 are essential for the app’s future on iOS platforms, but not the type of thing that will create catchy headlines or offer enticing new functionality. This is the kind of thing that many developers could easily put off, and I view the fundamental changes as evidence that the Ulysses subscription model is working. This is the kind of thing that reassures me that I’ve chosen the right tool and makes me feel confident that Ulysses will be around for a long, long time.

The release of the new Ulysses versions is available now and can be downloaded for free from the App Store and the Mac App Store. A subscription is required to unlock the app on all devices, and includes a free trial period. A subscription is $4.99/month (or $39.99/year), and is also included with a SetApp subscription. If you’re a student, you can use Ulysses at a discounted price of $11.99 per six months (discount is granted from within the app).