As Apple users, we‘re blessed with an abundance of great software. This was true even before 2007 brought the launch of the iPhone and the eventual rise of iOS. The Mac had great tools like NetNewsWire, MarsEdit, and Yojimbo back in the first half of the aughties.

Now as 2017 comes to a close, the abundance is greater and we have to pick and choose the apps in which we‘ll invest our money. With this greater abundance has come a new way for developers to earn a living offering their products: the subscription model.

Some people are happy with this change; it means their favorite apps will continue to improve and not die a slow death. Other people hate it, especially when a developer switches from a traditional pay-once model to subscriptions (Ulysses was a great example of this).

But one thing is true for most of us: we can only take on a certain number of app subscriptions each year.

I‘m a regular guy. I have a family (a good sized one) and all the regular expenses that come with it. This means my annual/monthly budget only has so much room for app subscriptions. I have to pick and choose which apps bring me the most value and are most vital to what I do each day.
But there is a new option that opens things up for us Mac users.

The team at MacPaw launched Setapp in late 2016. What is it? They describe the service this way:

Rather than subscribe to your apps one at a time, Setapp is designed to allow you to pay one subscription price that gives you access to many different apps. Like Netflix, Apple Music, or Spotify, but for Mac apps.

As a long time user of CleanMyMac, I was on the MacPaw marketing list. So I checked out the service when it first launched. However, I already owned a lot of the better apps in the package. The rest of the apps were less than enticing.

It felt like more of a gimmick to me at first — way for less well known or lower quality indie developers to get their apps in front of a wider audience.

However, I recently gave this service another look and was pleasantly surprised by a lot of the options. There are a few heavy hitters, some very nice niche utilities, and a bunch of products that are an alternative to apps you already use.

Here are a few that caught my attention when I gave Setapp a fresh look.

This is just a sample. There are over 100 apps now in Setapp and I didn‘t even mention some of the bigger ones like Ulysses or CleanMyMac (apps that I already own and pay for).

Why The Model Works

There are several advantages to this concept. For developers, they can spend more time improving and polishing their product rather than focusing on marketing, support, and some administrative tasks.

For us, the end user, the most obvious benefit is cost. It‘s cheaper for us to pay one price and get multiple apps. If there are a couple of flagship apps that you already use, Setapp will allow you to use apps that we would never have shelled out for. 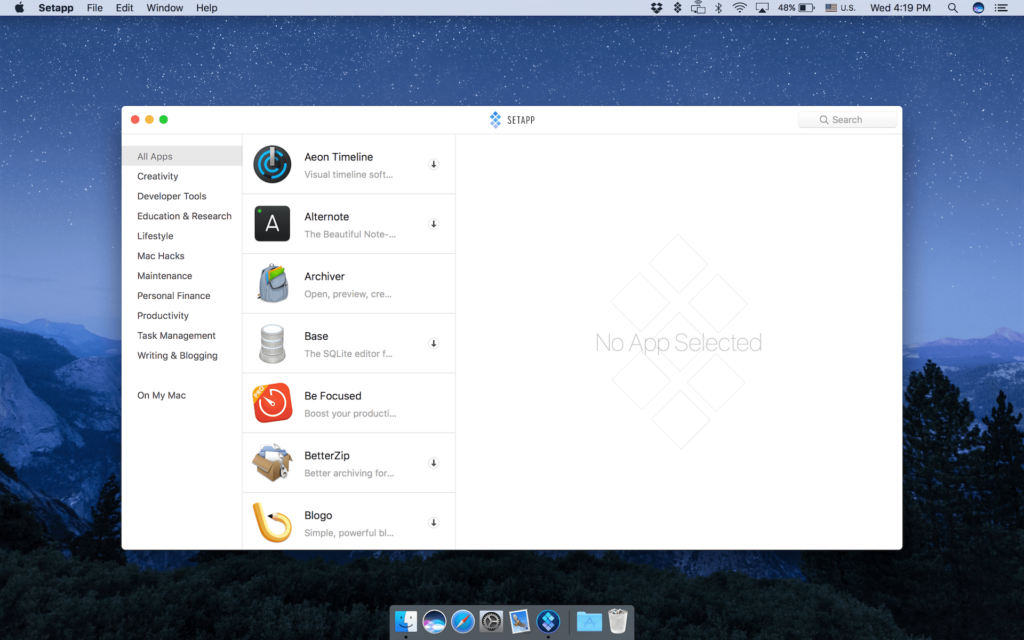 For me, Ulysses is a key tool that I‘m already subscribed to. Apps like Ulysses will always get my money. Since it‘s included in Setapp, I almost get the rest of the apps for nothing.

Obviously, we care a lot about the tools available for our Apple devices here at The Sweet Setup. Getting access to over 100 apps for $10 a month is something worth considering at the very least — especially if you’re already paying for some of them.