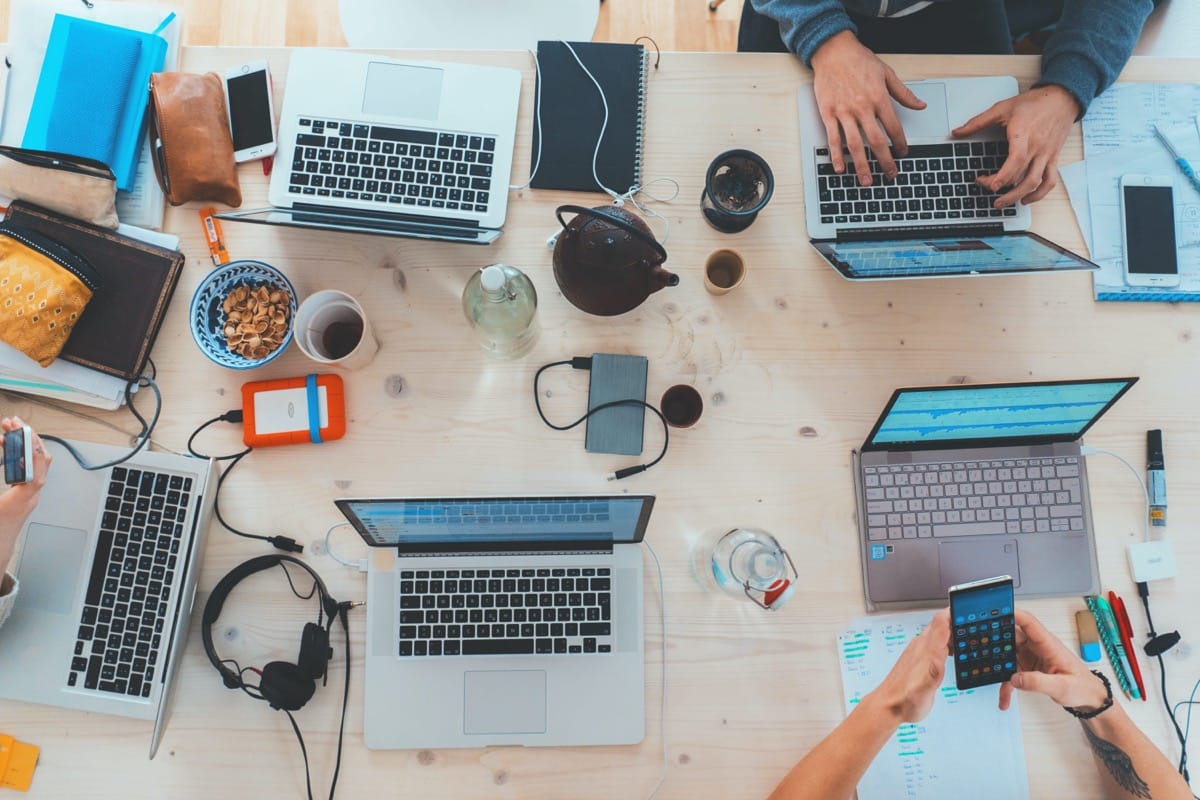 My adventures in task management began with Evernote and The Secret Weapon. My corporate job had begun pushing the limits of my memory and led me down the stereotypical path of overwhelm. A quick internet search led me to GTD, TSW, and Evernote, and I thought I had found the solution to my stress.

Ten years later, I look back on that time and shake my head at what I tried to do with that system. Not only did it fail, it made me think I was on top of my commitments. In reality, I simply gave myself justification for putting off tasks and “work” that kept me busy without making progress.

And in attempt after attempt, I regularly thought it was the tools that failed me. So I’ve spent hundreds, if not thousands, of hours building and sharing scripts and fancy workflows for OmniFocus, GTD, text files, calendars, and numerous one-off tools with the intent of making me more productive. And yet, every time I finished the build of one of these scripts, I would quickly look for the next one to build instead of using the thing I had just made to do real work. It’s almost maddening to reflect on it.

Listeners of Bookworm know that I have slowly morphed my system away from GTD and towards a more unique, as-needed, analog format. But even that has been a difficult, fire-fighting setup that is unhelpful when I look at long-term projects and regular, repeating commitments.

In June of 2021, my wife and I bought a five-acre property in the country that is one part dream come true and one part nightmare. The dream is the property itself. It has woods, hiking trails, 100+ year-old oak trees, more than a dozen fruit trees, outbuildings, the works. The nightmare (though that’s a tad strong here) is the house itself. It was built in 1895 and has had many remodels, additions, and bad, temporary fixes.

The obvious goal here was to remodel the house. However, there was a tight deadline. We had just over three months to tear out two load-bearing walls, remove any lead and asbestos, rewire two-thirds of the outlets/lights, fix sloping floors, rebuild the kitchen, and make it livable again. So the work began.

With a project of this scale and with a really short timeframe, I needed a way to manage it in detail or we would end up moving into a house with no heat, no toilet, no kitchen, and no water. But I also needed to manage it alongside my wife, who has been an absolute Godsend. There’s no way I would have pulled this off without her and she needed to be in the loop with what needed to be done and when.

Being the productivity nerd and tech guy, I ran through the tools for this in my brain and landed on Basecamp for it. I know the project management folks out there are laughing at this choice, and I hesitated at the beginning as well. But the bottom line is that Basecamp is easy to pick up, easy to share, and doesn’t have a lot of fancy features to get in the way. That last point was the biggest selling point.

All I did was set up a to-do list for each week of our given timeframe. That told me what step needed to be done and when. It’s also what allowed me to schedule sub-contractors months in advance and handle the ridiculous lead times for materials that we were facing. 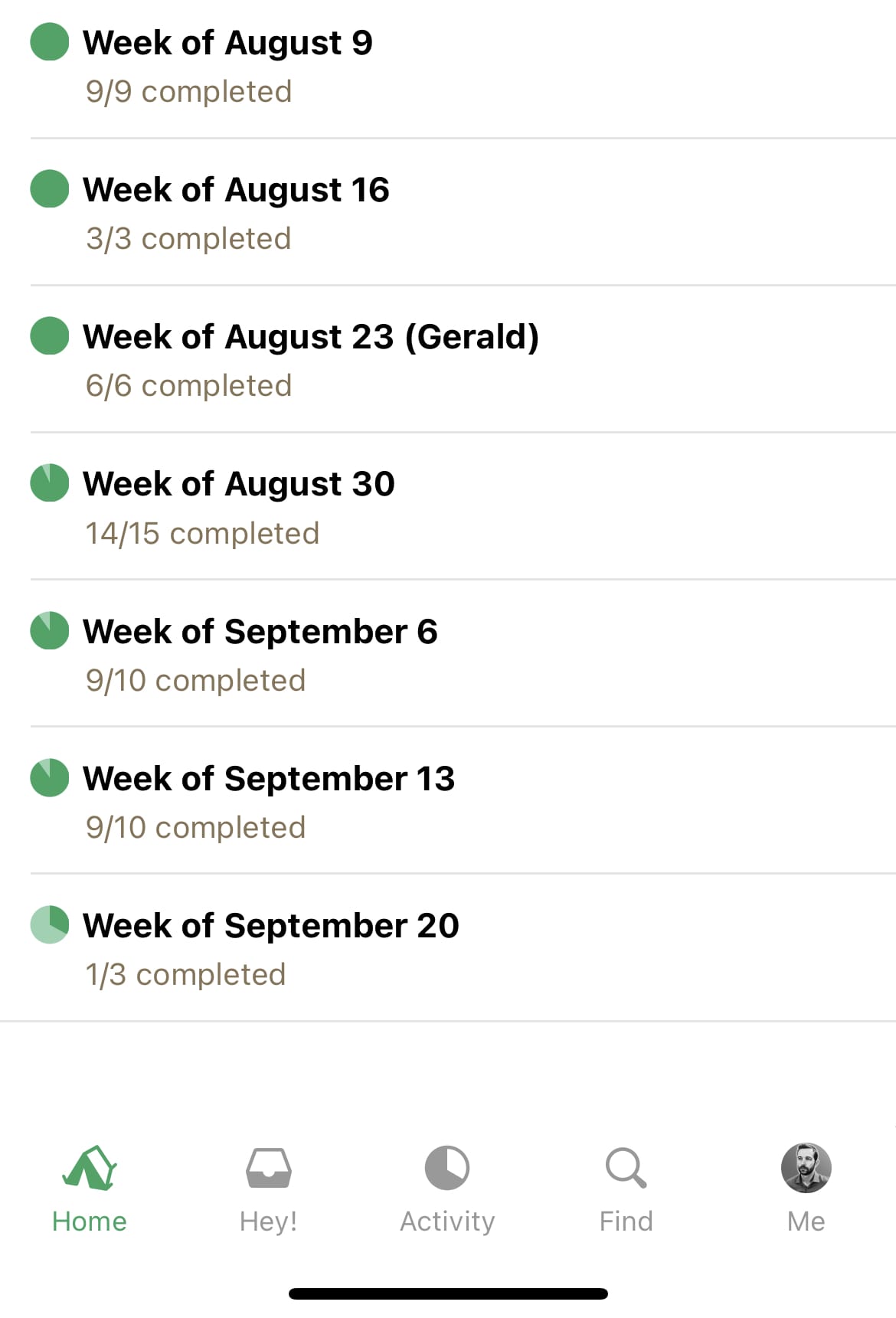 It sounds simple enough when I explain it this way, but there are a few routines that developed as a result of this simplicity. Here is what happened when I broke it down like this:

You might as well forget about doing a weekly review or even a daily review. I was doing a review of these lists up to five times in a single day. That wasn’t the norm, though. It was at least once every other day but it never went further apart than three days.

And when I say “review” I mean a glance at what this week looks like and what was scheduled for the upcoming five to six weeks. I would often move items between the lists and add or subtract items as the scope and timeframes changed.

The fascinating thing to me was that there was no need to schedule this. I didn’t need to set aside three hours on Friday afternoon and I didn’t need a checklist to know what to review. It just happened. More on that later.

Side point here: I didn’t have a written “done” statement or Horizons to look over as a way to keep me on track. That was obvious.

I’m pretty good at the DIY thing. But I still did a ton of research to make sure I was doing things the right way and nailing down where and when to buy things for the project. But that meant a lot of information to hold and way too many ideas to process. Thankfully, I’ve had the habit of capturing into Drafts for years now. So that simply continued. 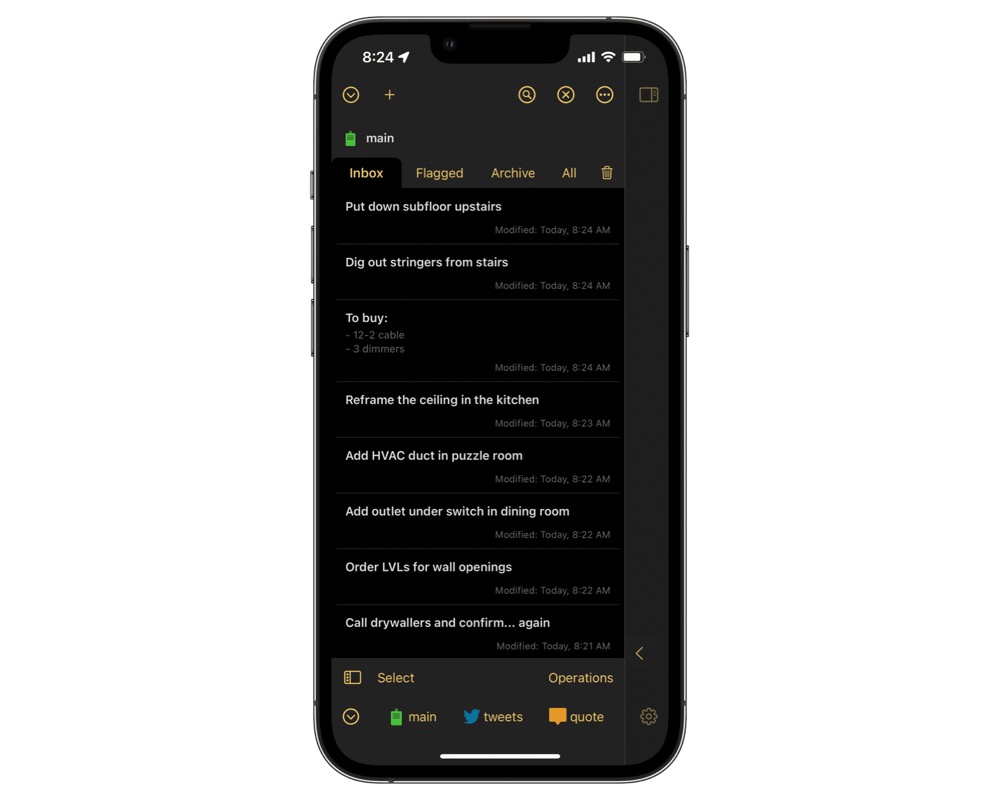 But again, there was no set time for clearing that inbox. It was at least daily, but mostly it happened whenever I had a break between tasks. I would finish a phone call and then glance through my Drafts inbox and move things to Basecamp (if it was an immediate, scheduled action) or my text files (if it was just an idea) for later.

3. Leave it in the inbox

This one gets the productivity nerds upset. Whether it was Drafts, my email, Messages, or voicemails, I would leave things in the inboxes for later. The one caveat here is that “later” was typically no longer than one day. And it only happened in one specific scenario: now was not the time to act on it and I didn’t have a clean spot for it.

Yes, the technical answer here is supposed to be that everything needs a place. But what if that place you create is temporarily needed and not going to be used in the future? I knew that would be the case for me in most of these. It was better to leave it in the inbox and act on it later than it was to create an entire set of systems, folders, or whatever for it and then manage that extra folder in perpetuity. Just leave it there. It’s okay. 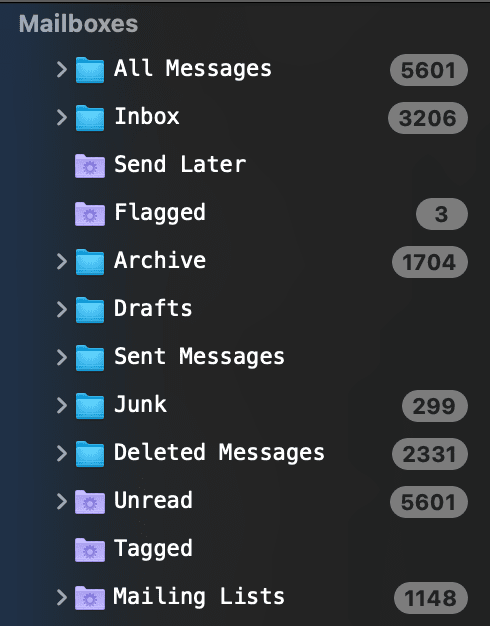 A good example of this was electrical permitting. I had the actual permit files to hold on to, a phone number for the inspector, and specific tasks to complete for the inspector. These were all sent to me in emails, but the timeframe was about two weeks from the receipt of those emails to the completion of that stage. I simply left those in the inbox for a couple of weeks. After the final inspection passed, they were simply archived. Sounds like clutter, I know, but as long as it’s not 100 staged emails, it worked great.

This is hard to teach and even harder to articulate. When I felt like I wasn’t going to meet a deadline, I would review this week’s list and the upcoming two to three weeks to see if there was something smaller I could do now that would give me some margin. Thus, the sporadic and unpredictable reviews.

And having a super simple system in place with easy to retrieve supporting materials meant that any time I needed to check a document (electrical code, framing requirements, our designs, etc…), it was always easy to find. I knew that everything about the project was in one place or reachable from one place. And that simple fact meant that I could quickly reference almost anything whenever I sensed a pain point. In other words, I would trust myself to know when I needed more information for the task at hand.

It’s that last point that gave me peace about everything I was doing. I knew I was on the right piece of the project almost always, and it wasn’t due to an elaborate meta-system I had put in place with flow charts and five different applications. It was simple enough that I intuitively knew where to go to get things and it was just complicated enough to manage this remodel.

So, the big question is: how does it work? Great! We moved in with nothing major left to be done and all the sub-contractors and materials showed up when we needed them. I couldn’t ask for more.

The little hidden question behind all of this: how have you translated this to day-to-day work? Great question. Right now, I manage everything from my text file system. More to come on that front.