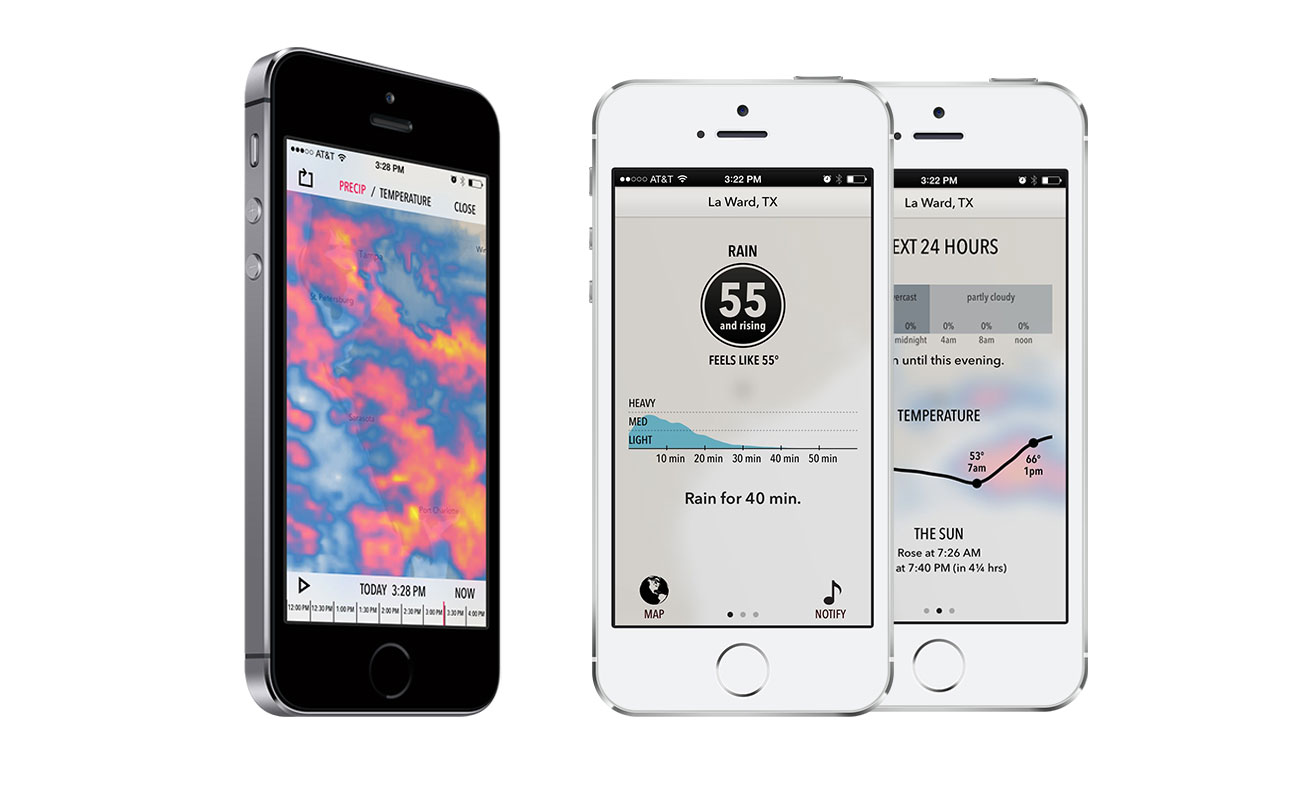 The best radar app you can get for your iPhone is Dark Sky. Dark Sky’s radar animations are smooth, fluid, and unlike any other radar app’s animations. Moreover, Dark Sky has something no other weather app has: the ability to tell the future via its highly-accurate short-term localized precipitation predictions.

When it comes to radar apps, there certainly is no shortage in the iOS App Store. With prices ranging from free to over $9.99, it can be very hard to tell which is the best. What most apps won’t tell you is that, in the U.S., many of them are drawing radar data from the same source and showing you the same imagery as is publicly available on the web.

As you can see from the screenshot above, that data looks more or less like an 8-bit video game of pixellated rainbows. In other words: radar images look relatively bad when you compare them to any other UI element on your iOS device.

This, in large part, is why the best radar app you can get is Dark Sky.

The Dark Sky radar maps are completely different than every other major radar app — they are the smoothest and best looking radar animations out there. Though the coloring is non-traditional, the information is still easy and fast to review. The maps move smoothly, the radar data is very natural looking, it loads quickly, and allows you to easily scrub along the timeline to quickly see weather patterns as they are emerging. I dare say it makes radar animation fun to play with.

We contacted the developers of Dark Sky to ask them just how their radar imagery is so much smoother than every other app. Developer Adam Grossman responded via email, saying:

Part of what we have to do on the prediction side of things in our backend is generate a map of storm velocity and how the rain intensity is changing over time. We use this data in our API to make predictions, but we also use it in the app to generate the smooth animations.

What we end up with is a crazy image format that contains not just what the storm looks like, but also information on the dynamics of the system.

The app has an OpenGL fragment shader that reads out each piece of this data and uses it to project the storm to any particular point in time that we need. It basically uses the velocity and intensity-change data to fast-forward or rewind the storm to any arbitrary point in time (even if that time is in between radar frames). And since it happens on the GPU, it’s fast, resulting in the smooth animations you see.

With its iOS 8 update, Dark Sky is now using Mapbox map tiles, making the map itself more accurate than ever before.

If you have never seen the app, here is a good video comparison of Dark Sky radar to the “standard” radar views (via the Dark Sky website):

Dark Sky has the added benefit of highly-localized (and amazingly accurate) short-term rainfall prediction and warnings that alert you to rain within the next 60 minutes for your location. Dark Sky is able to send you push notifications of impending wetness, as well as show that data in a beautiful graph displaying information for the next 60 minutes, while also showing you the confidence of the prediction visually as a wavering graph.

Dark Sky comes with what has to be the simplest Today view widget on the App Store: a single line showing the next hour’s forecast: Using info from Forecast.io, Dark Sky includes information about the next six days as well: In recent updates, it’s also become a more general purpose weather app. With its 5.0 update, it also added a lot of really great features. They have added an in-depth timeline to the main screen.

It’s really easy to swap from temperature, precipitation probability, wind speed, humidity, and UV index. It also added the option for a daily summary notification and severe weather alerts. You can you also add custom alerts for letting you know if you’ll need an umbrella or if it’s going to get below freezing and you need to cover your plants.

Another interesting addition is crowd-sourced weather. You can submit the current weather where you are, which helps Dark Sky validate their forecasts. If you have an iPhone 6, you can also turn on automatic pressure sensor reporting with the built-in barometer.

Overall, Dark Sky is one of a kind.

The biggest down-side to Dark Sky is that the radar’s default view is zoomed out so far it isn’t all that helpful. While it’s not a huge deal to zoom into a more local view, it does add a step if you want information a little closer to home.

That said, its uncanny ability to know just when rain is going to start or stop, coupled with powerful radar images, is tough to beat.

Our second favorite radar app is NOAA Hi-Def Radar. The app is free from a lot of clutter that other radar apps present, and offers a good amount of customization for users through different alert settings and radar layers.

Our biggest complaint is with how long the data takes to load — even on fast networks it can take some time. Also, the animation is not nearly as smooth as the animations seen in Dark Sky, as they jump from frame to frame instead of smoothly moving about. We wish the user could control the flow of animation for the radar, but as it is, the image is either static or runs through a loop that you can pause at any time.

One other large downside is that the app doesn’t automatically “jump” to where you are located when you launch the app — adding a couple extra gestures to get the app where you need it to be.

Where NOAA Hi-Def Radar excels is in adding data and offering the most standard look at radar out there. (Whereby “standard,” we mean what you are likely to see weather casters on TV using for coloring and visuals.) NOAA Hi-Def Radar offers the ability to add or adjust:

The latter of which is a great help for those that live in regions where such weather patterns are more common — saving you from buying yet another app that offers the same information, but repackaged. The app also offers options to change some color schemes if you like satellite views, as well as a nice fullscreen mode.

Overall, NOAA Hi-Def Radar offers a solid radar app, but due to the jittery radar animation it falls short of being our pick among all radar apps tested.

It is worth noting that our favorite general-purpose weather apps, Check the Weather, and runner-up Perfect Weather, offer very solid radar offerings within the two apps.

Check the Weather uses data from Forecast.io (from the creators of Dark Sky) and shows the short-term rain prediction data, but doesn’t offer to send push alert warnings and does not use the same beautiful radar animation for the radar image itself. It will do in a pinch, but serious radar enthusiasts will be left wanting more.

As noted in our general purpose weather app review, Perfect Weather’s main screen is dominated by a radar image. With Perfect Weather, radar enthusiasts will find a better app, albeit one that offers radar imagery very similar to our runner-up NOAA Radar Pro. The imagery moves frame by frame, instead of smoothly through time. Do note that in Perfect Weather you can easily pan around and change to a cloud view from a precipitation view.

Overall, if you don’t need advanced radar features, and are looking for something a little more than Apple’s built in offerings, it is worth taking a look at our general purpose weather app post. But keep in mind that there’s more to Dark Sky than just its radar, and with the recent updates to the UI and overall functionality, it’s taken a few steps closer to claiming the best general purpose weather app prize.

$3.99
Dark Sky’s radar animations are smooth, fluid, and unlike any other radar app’s animations. Moreover, it has something no other weather app has: the ability to tell the future.
App Store $3.99

Ben Brooks lives in Lakewood, WA. He has a passion for talking about technology, and expresses that passion on The Brooks Review. Outside of that, he is rather boring.