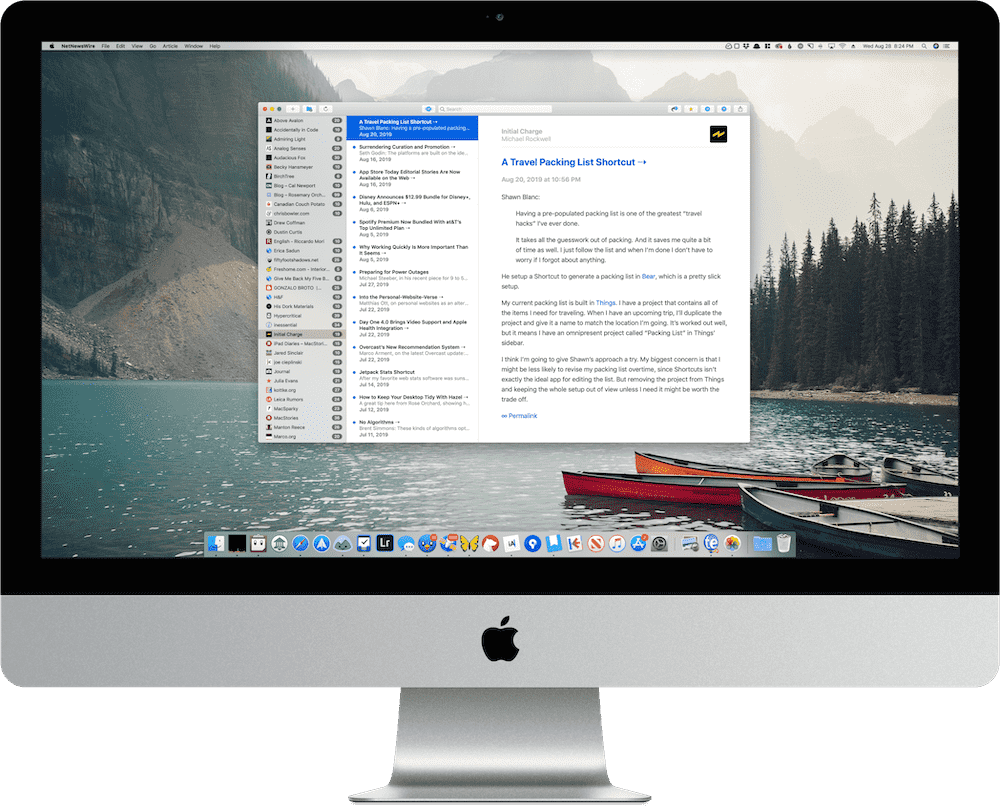 NetNewsWire has changed my expectation for Mac application development. I’m not a programmer, but Brent and his Eddy Award winning program have been an onramp for me to learn more about the indie Mac Development community, and that is why I’m so fond of this application. NNW has become a marker to me for when my eyes were opened to the many heroes of the Mac community who create amazing software and make our OS X lives that much better…

What makes NetNewsWire so great is that it at once appeals to every level of user.

For the basic user who checks a few feeds once a day, NNW provides a familiar and friendly environment. For an average user who has several dozen feeds to keep up on, NNW is quick and effective. And even the power user, who lives and breathes inside their feed reader, will discover that NNW has the horsepower to feed their need for feeds.

From the NNW homepage, Cory Doctorow says, “This is the app that lets me drink straight from the Internet firehose, and I couldn’t live without it.”

This is the app that lets me drink straight from the Internet firehose, and I couldn’t live without it.

Those words are 12 years old — a millennia in the software world — yet they feel quite applicable to this week’s launch of NetNewsWire 5.0. With the constant strain of social media being plowed down our throats, the cool, calm, collected world of RSS feels like it’s making a comeback.

And that comeback couldn’t be quite complete without a NetNewsWire in town.

This past Monday, Brent Simmons relaunched NetNewsWire as an open-source RSS reader for the Mac. NetNewsWire began as a project referred to as “Evergreen,” but became NetNewsWire when Simmons reacquired the app in 2018. NetNewsWire started as Simmons’ project in 2002, was sold in 2005 and again in 2011, and was re-acquired in 2018, all to be relaunched as version 5 in 2019.

In short, Simmons describes the app as:

It’s (NetNewsWire) designed to be stable, fast, and free of bugs. It doesn’t have a lot of features yet, and that’s because we prioritized quality over features. We will be adding more features, of course, but not quickly. We’re also working on an iOS app.

This initial description is a perfect breakdown of NetNewsWire 5, and the entire notion of stability is fundamental to NetNewsWire’s experience.

NetNewsWire 5 debuts as one of the simplest and speediest RSS readers available for the Mac and has a classic, recognizably-Mac design that fits right at home in all versions of macOS. The common three-pane design puts your feeds and folders in the far left, each feed’s article list in the middle column, and the reader view in the right column. NNW 5 even debuts with a light and dark mode, ensuring it fits right in with macOS’s dark mode support.

Buttons are Mac-like with just a touch of dashing design. Buttons for creating a new folder, marking an article as unread, or sending an article to Safari all have a touch of elegance and simplistic design to them. 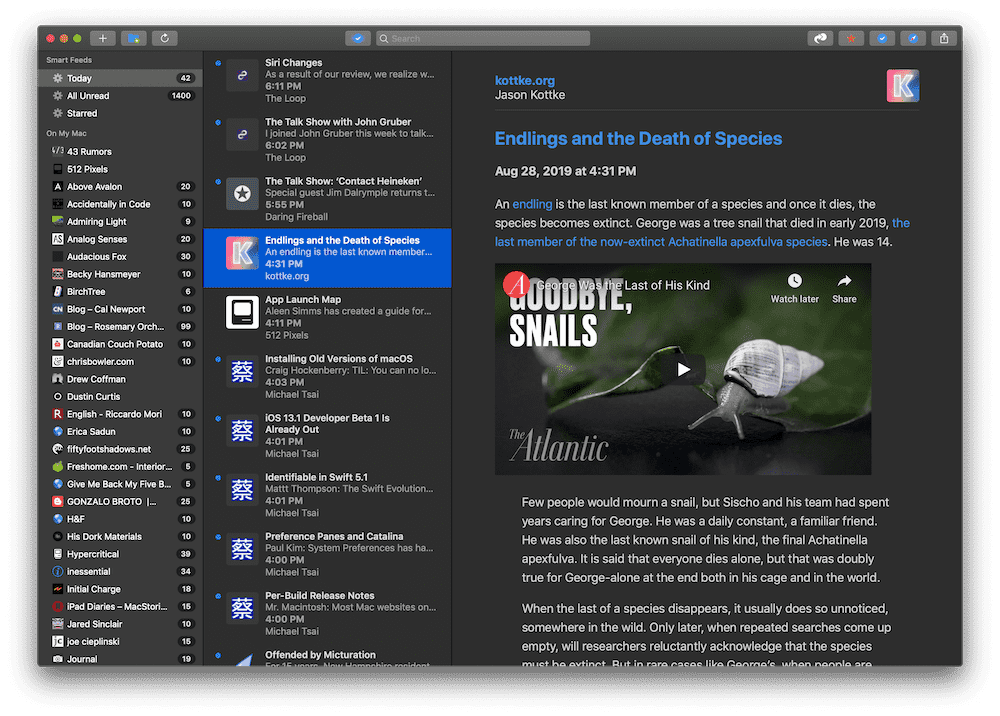 The Smart feed article list showcases a feed’s icon, the article title, a quick line from the article, the time of publishing, and the publisher’s name. (I quite like the fact that the “Today” smart list shows articles for the last 24 hours rather than for articles published after midnight on the current date. This makes sense to my mind, and means nothing is disappearing from view at the stroke of 12 o’clock.) 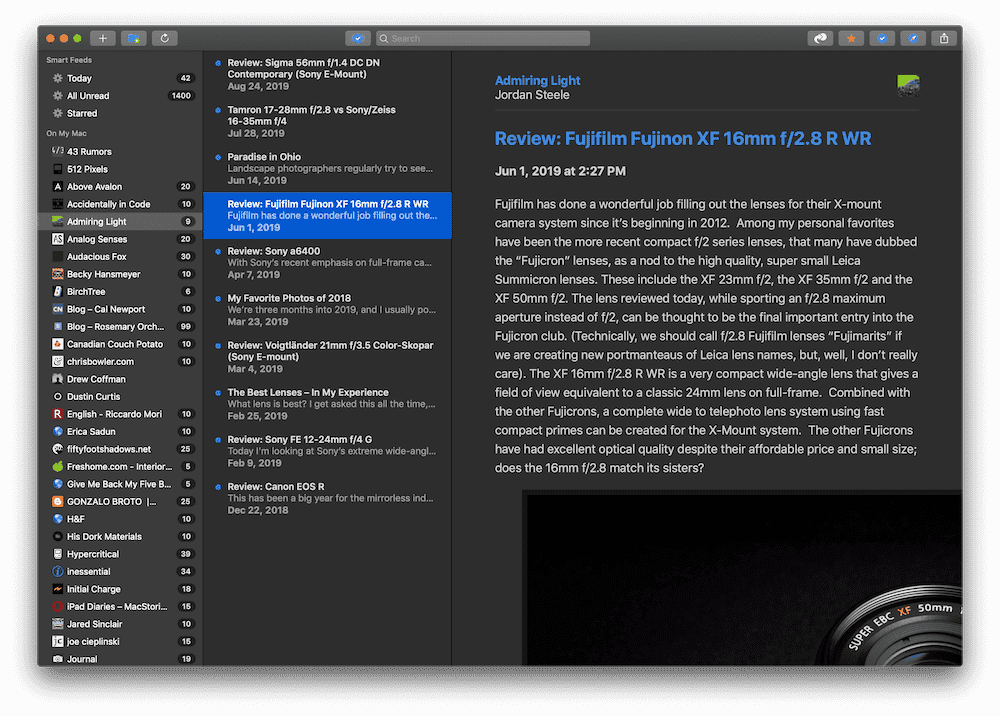 What’s interesting is the difference between a smart feed’s article list and a feed’s dedicated list — it appears NetNewsWire assumes you know which feed you’ve clicked into, so you don’t need to see the blog’s icon or the name of the publisher. Instead, you get a simple list of all the unread articles in that feed, with unread articles marked with a bright blue dot. Double-clicking an article in the article list opens it directly in Safari rather than — at least to my expectation — the article in a separate reader view window.

Clicking into any of these articles pushes the article into the reader view on the far right. The reading interface is sparse, simplistic, and completely free of customizable options. You can’t change font, font size, photo size, link colors, or anything of the sort. 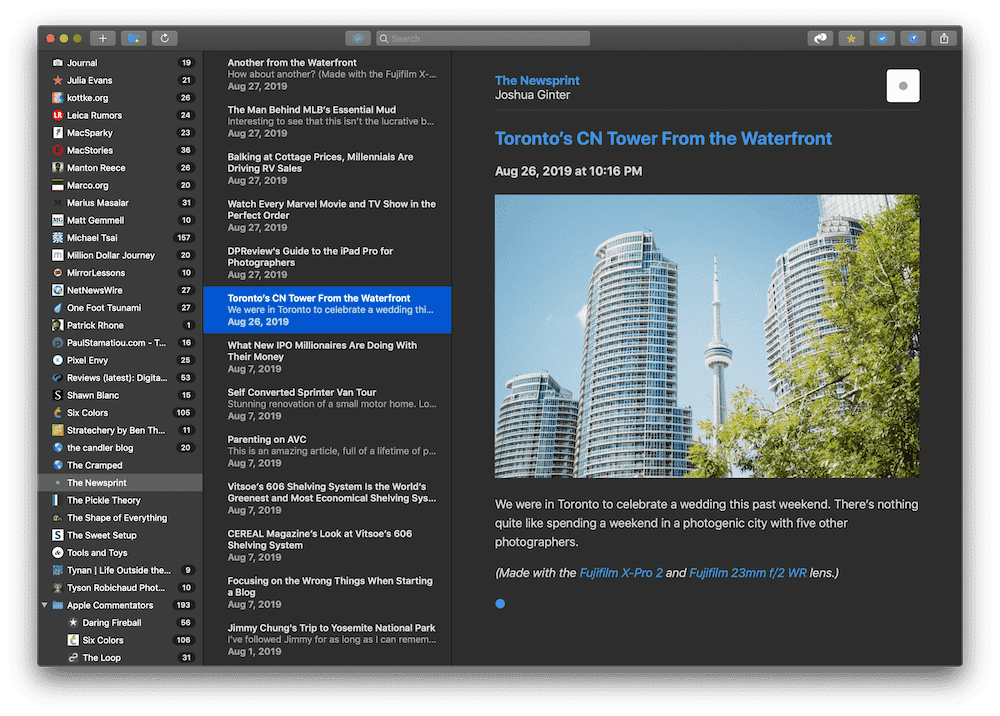 Photos span the view and change as you change the window size, while text is comfortably large and set in the default San Francisco font. I especially like the large headers and the easy-to-see blue links.

Everything about NetNewsWire is simple, minimal, and — most importantly — perfectly functional. This is especially noticeable in the speed of the app, but also in how the app operates via the keyboard — it seems every element of NNW 5 is operable via the keyboard, the arrow keys, or a keyboard shortcut.

These keyboard shortcuts make the app unbelievably fast to use when digesting your feeds.

Update: As noted by Brent Simmons on Twitter, you can use the standard undo keyboard shortcut if you’ve accidentally marked all unread articles as read.

It’s clear from the outset that NetNewsWire 5 has been prioritized for speed and stability (aside from the fact that Simmons stated as much in the introduction). Everything about NNW 5 is lightning fast and I haven’t found a single crash in my use so far. 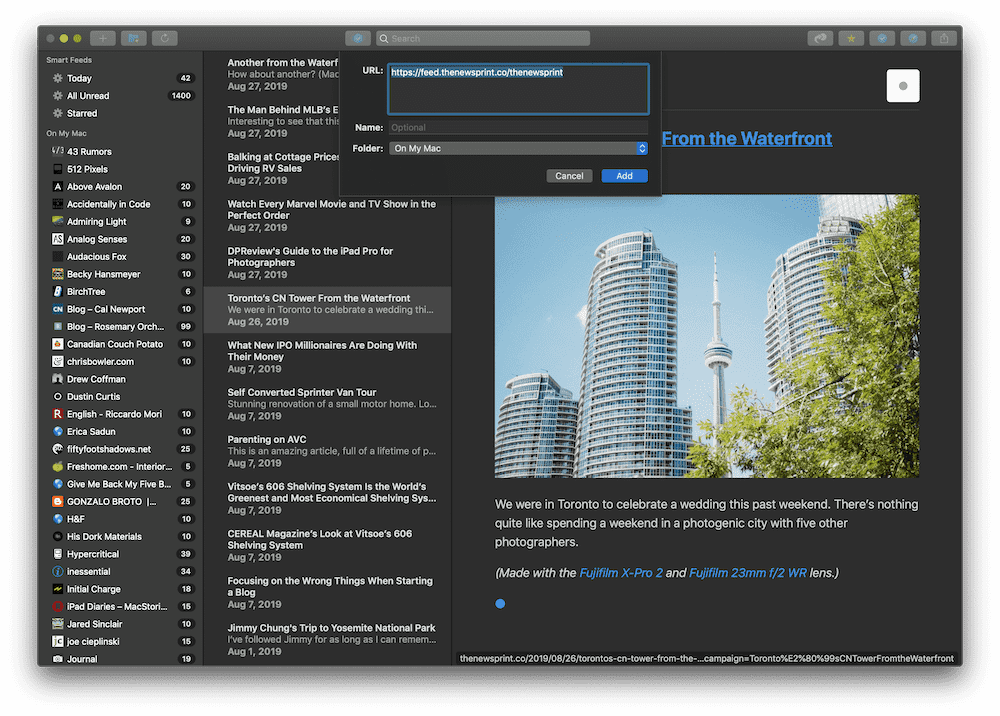 I imported about 100 feeds into NetNewsWire in about 3 seconds (done easily from an XML file) and feed refreshes for all 100 feeds took about 5 seconds.

Moving from the feed list to the article list with the arrow keys is swift and completely natural, and a quick right arrow key moves you into the reader window for navigating through longer articles. Again, every one of these key strokes and movements is lightning fast, with no on-screen animations or indications of movement within the app. It’d be nice if there was something to indicate which piece of the window was currently active, but the lack of animations, code, and design ensures NetNewsWire is instant.

And I have yet to be able to crash NetNewsWire. I’ve heaped a lot of praise on the latest version of Reeder 3 for the Mac, as Reeder has always been one of those apps that “just works,” no matter what time period. NetNewsWire, without any doubt, beats Reeder on the stability front. Without any nifty animations or customizable options, NetNewsWire is quite possibly the most stable app on my Mac.

What NetNewsWire is Currently Missing

NetNewsWire’s latest rendition has been in the making for a long time and, as noted, has prioritized speed and stability above all else. As a result, there are a fair few features missing from NetNewsWire, many of which may be dealbreakers for potential users. 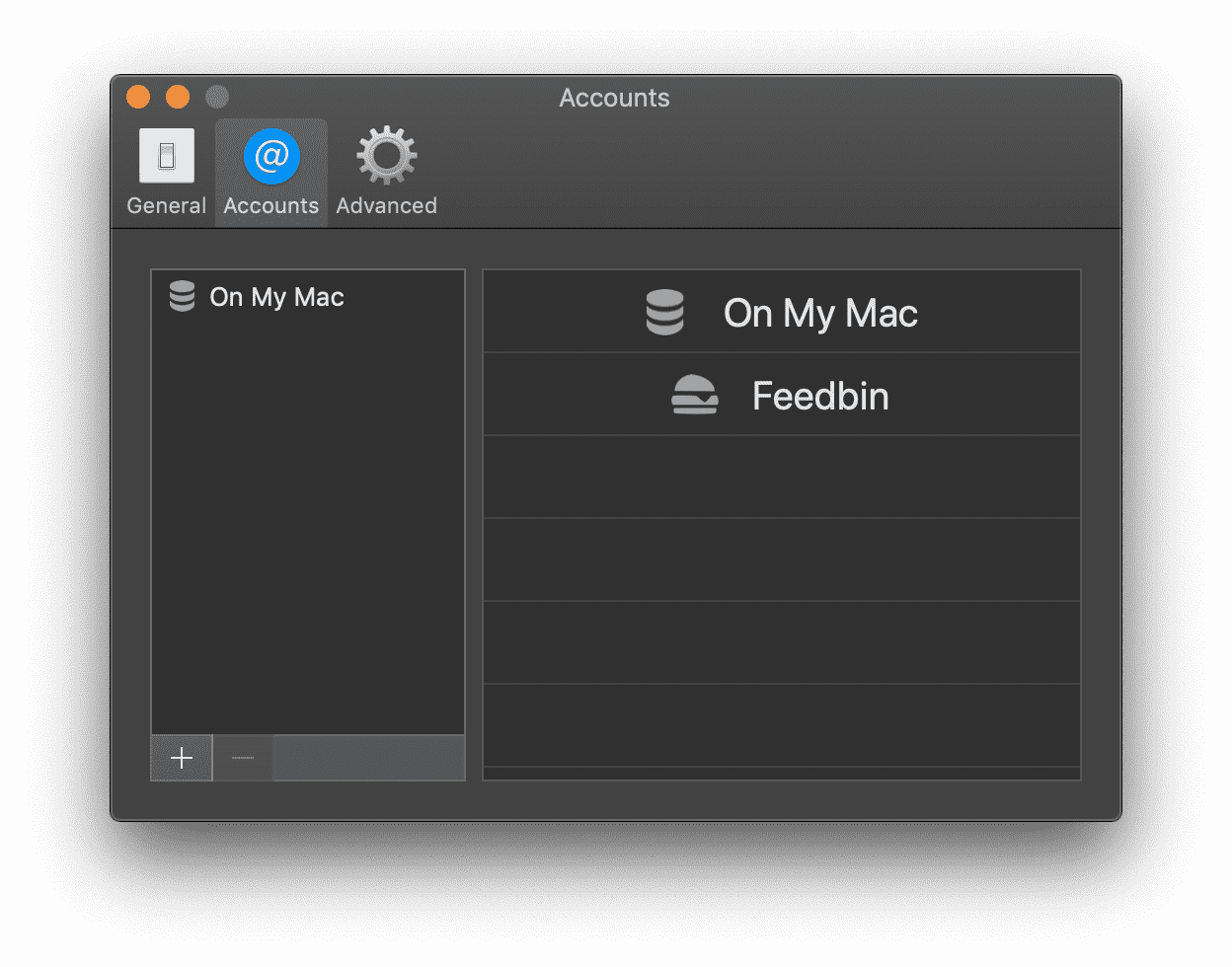 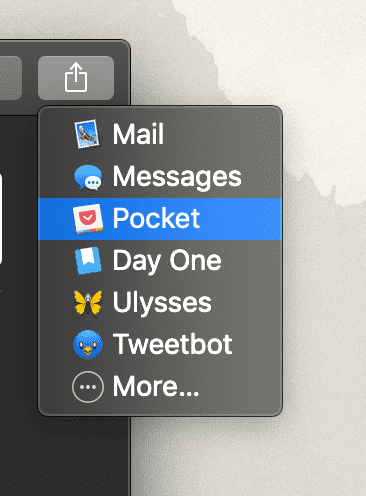 Direct Instapaper, Pocket, or Read-It-Later Support: This may or may not be a big deal to potential users, but apps like Reeder and Fiery Feeds (on iOS) have moved towards implementing their own read-it-later features as of late. You’ll find nothing of the sort in NetNewsWire 5, but you can access saving to Pocket or Instapaper via macOS’s share extension.

No Customization Options: Although the lack of customizable options may be responsible for NetNewsWire’s speed and stability, the ability to tailor a reading experience exactly to your liking is ubiquitous across Mac RSS apps. I don’t want to see NNW adopt customization options for the sake of adopting them — I think speed and stability should remain the first priorities. However, for more users to adopt NNW, customization options are going to be required. 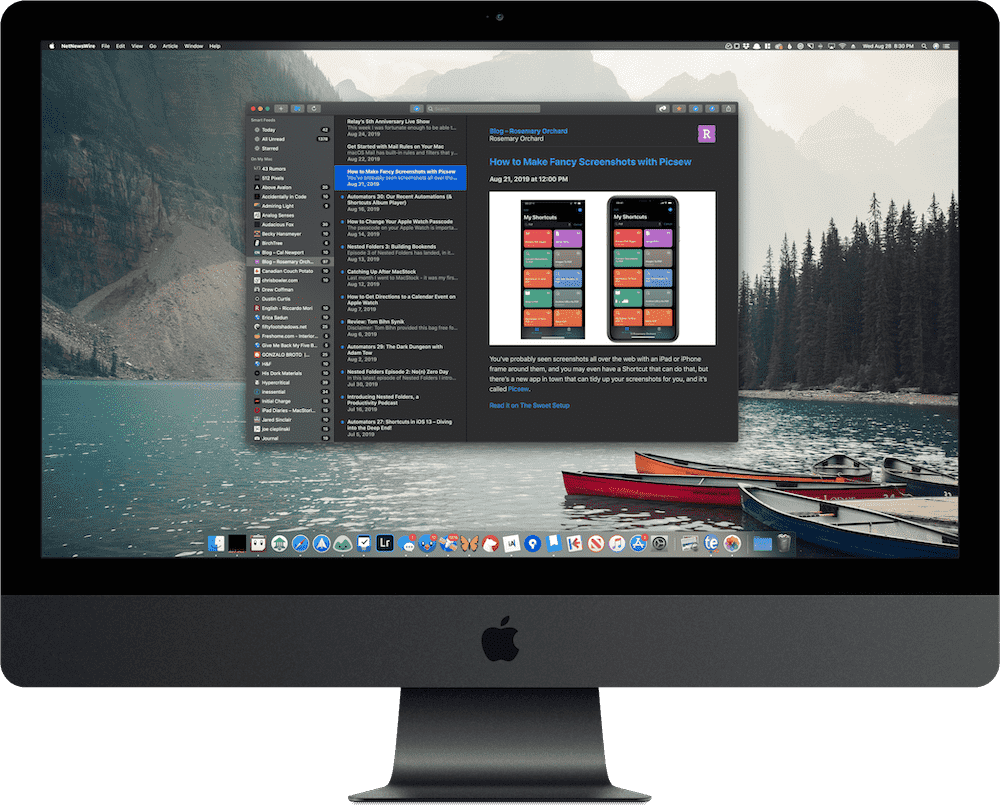 That said, the foundation of NetNewsWire is very, very impressive. This app feels bulletproof and lightning fast, putting long-time apps like Reeder to shame. With further sync services in the pipeline among other core features, NNW 5 is sure to grow into a worthy competitor in our review.

Another thing going for NetNewsWire 5: The app is completely free. Brent Simmons and a host of additional contributors have made NNW an open-source and completely free project. For anyone not wanting to drop cash on an RSS reader, NNW may very well become the default option (especially when further sync services debut).

To get your own look at NetNewsWire 5, check out the website. For a free, stable, and super fast RSS reader for the Mac, NetNewsWire 5 succeeds with flying colors. 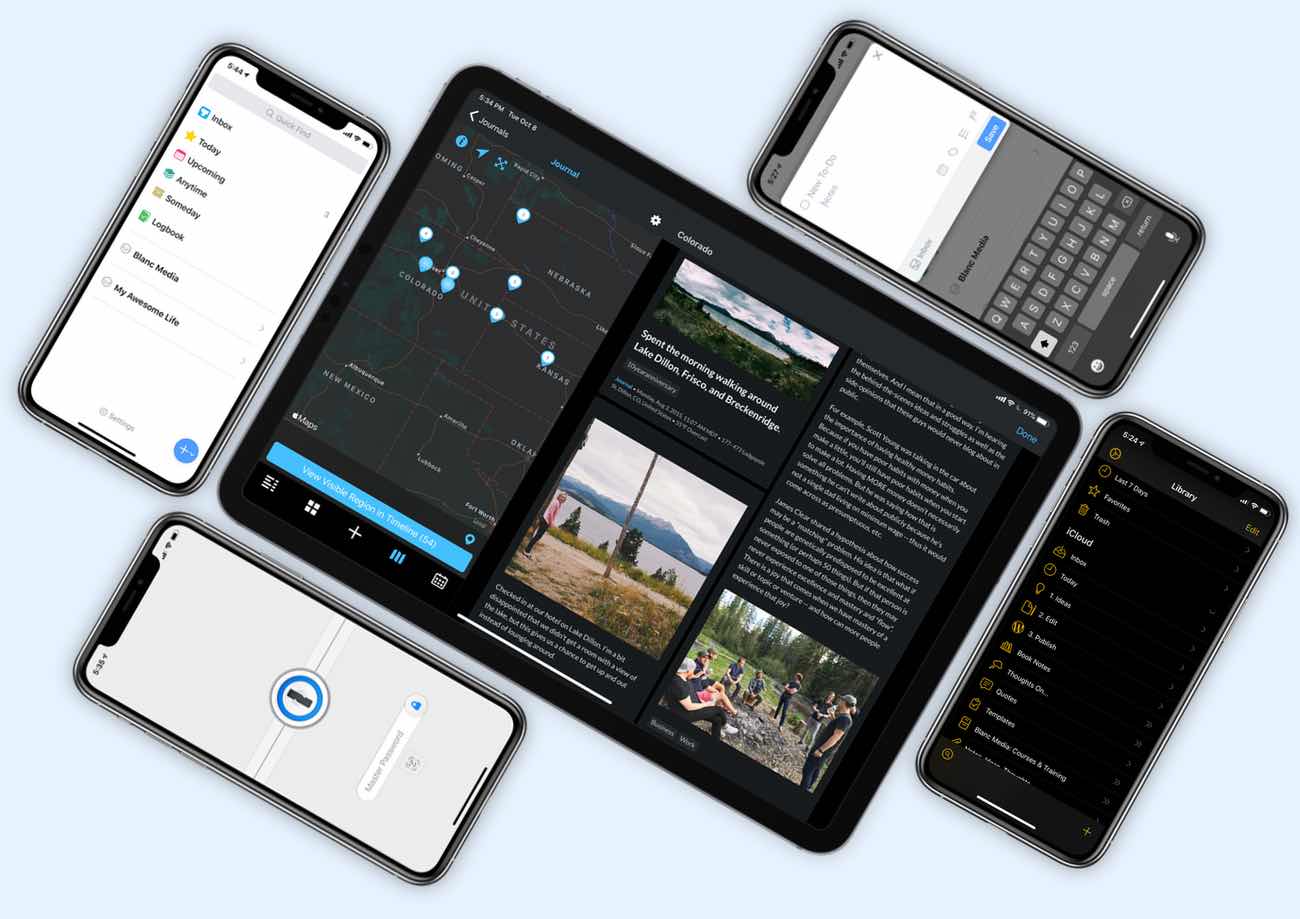