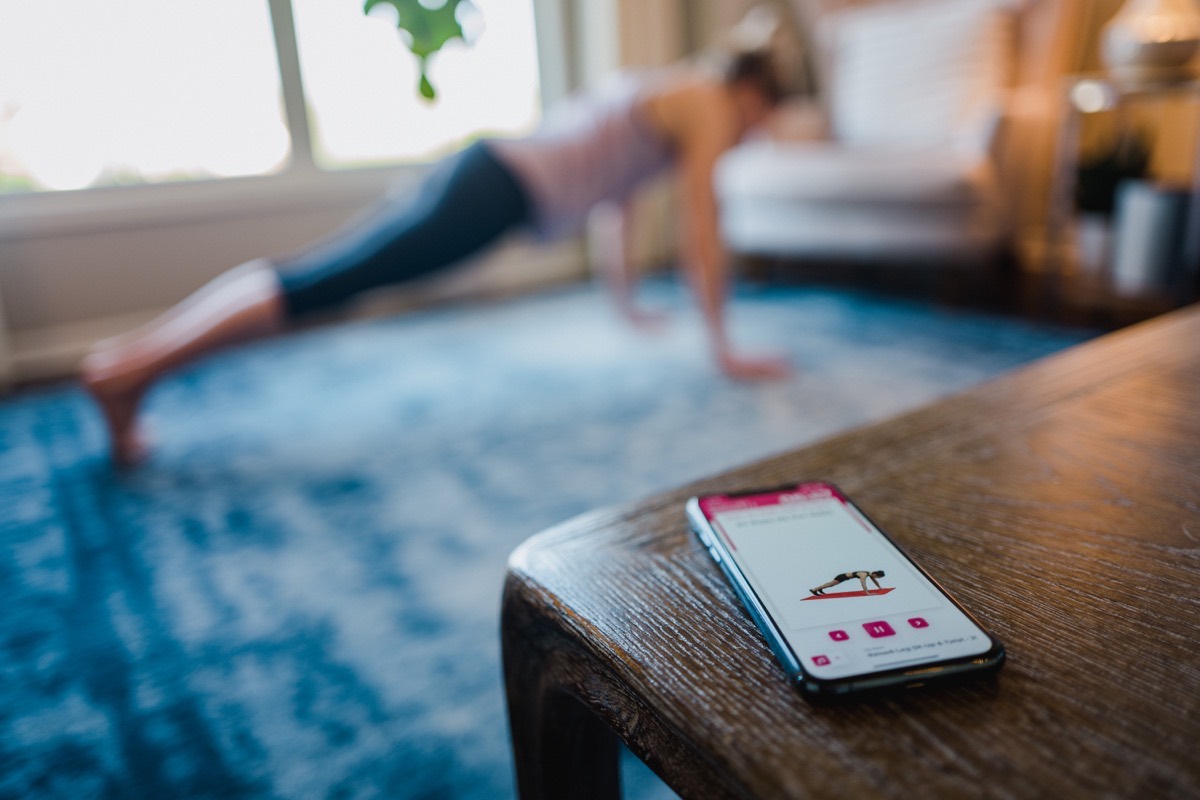 I would think the best advocate for an app in any space is an expert in that category, or at least an aficionado or someone who knows a thing or two on the topic. However, in the workout category, I would argue that the best critic is the person who hates working out, thereby setting the bar for “best workout app” at the very high, single-category, distinguished standard of “will it motivate even the worst of us to want to use it.” Enter: me.

About ten years ago, I discovered a very direct connection between my level of physical activity and my mental health. It was eye-opening, and it caused me to begin to take exercising on a regular basis seriously. Staying active went from an occasional hobby to a daily necessity. 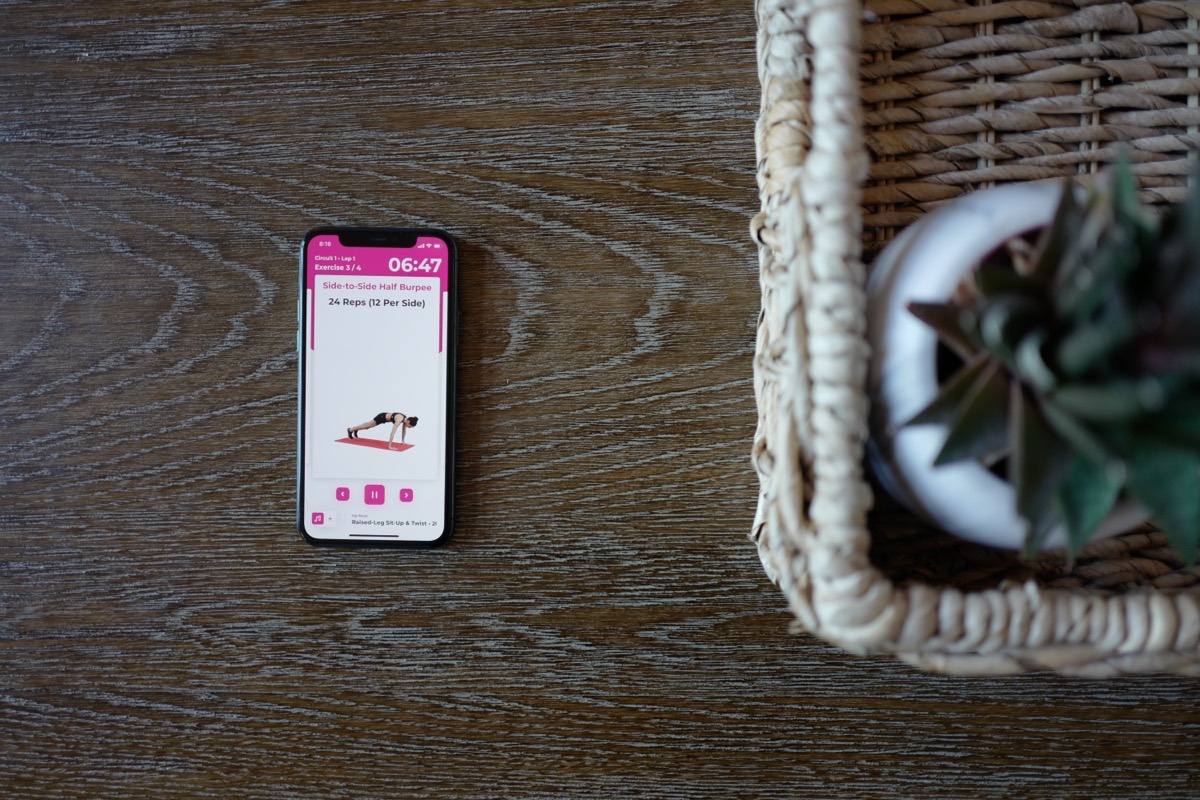 Over the years, I have tried many things to keep moving: three mile daily walks, Spin classes at my local gym, and weight lifting sessions with friends, to name a few. Eventually, work and motherhood caused me to need something even simpler. I needed something that wouldn’t be affected by class schedules and weather. Something that was an exhausted mom of littles I would actually get up early for. (I have spent much time trying to turn good intentions into calorie burn, but alas.)

At the beginning of 2019, a fitness instructor (who is also a friend of mine) suggested I try the SWEAT app by Kayla Itsines. She had been using it for years and swore by it. I downloaded the free trial, but I didn’t get my hopes up. I guess I assumed workout instructor friends would have a tendency to underestimate the ability of someone like me to just, well, stay in bed.

I was wrong. For the last 56 weeks, I have used SWEAT almost daily. And I can honestly say I am looking forward to using it again tomorrow.

The super power of the SWEAT app is that it tells you what to do every second, in real time, without requiring your full attention. If I wanted a workout app that required me to keep my mind engaged every second on what they were saying or showing, I would just do a workout video. But I have spent years in the workout video world trying to make it my thing (here’s looking at you, 30 Day Shred, and it was always pretty easy to find reasons why I couldn’t quite fit it in each day. 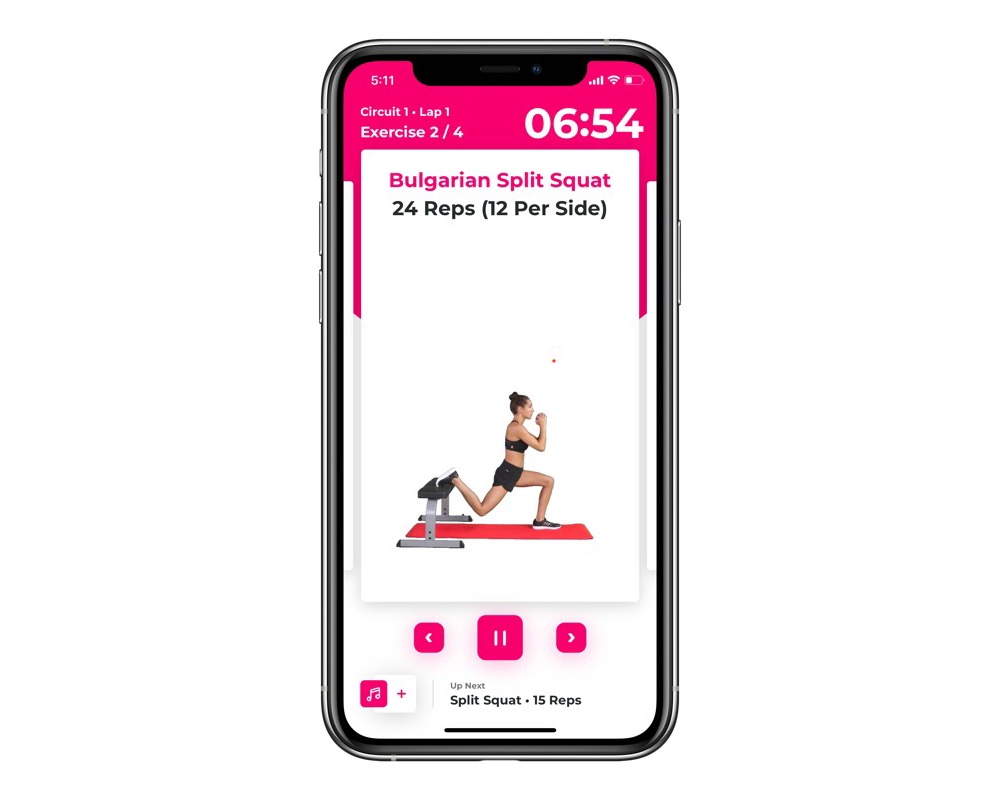 Using an app during my workout frees up mental space, and for me, that is gold. Something that helps me actually decide to work out is to hitch what I have to do with what I want to do. In this case, I have connected working out with watching reality television shows. I would not typically find the time well-spent sitting on my couch and watching old re-runs of Survivor. ( High five if that’s you). But paired with the SWEAT app, Survivor becomes my carrot. I have to get up for ab day because I have to know who got voted out at tribal council after yesterday’s workout. I can let Kayla Itsines boss me around on the side for half an hour as my excuse to watch mindless television. To be honest, I’m divided about my need for television motivation. Half of me feels like I should be able to conjure up some free-standing self-discipline by this point in my life. The other half of me wonders if I have indeed cracked the code on good-intention calorie burn after all.

Part of the joy of this app is its simplicity. Right when you open it up it has three simple, butt-kicking options at the top: legs, arms, abs. The goal is to do each of them within the week. That’s it! Thus, the chain of motivation required to get healthy is exceedingly doable. Swing legs over side of the bed. Open app. Tap Arms. Mindlessly follow directions. Done.

I can literally see the athletes squirming in their seats.

There are a million other amazing options that this app provides: cardio of various intensities, multiple instructors, power lifting, pregnancy workouts, postpartum, gym routines, varying time lengths, yoga, foam rolling, stretching, nutrition, community, and on and on and on. All the options that fitness gurus eat for breakfast.

But as for me? I stick to the few options at the top of the screen because I will actually do them. Once I complete arms, abs, and legs for the week, I complete the weekly challenge workout or select a specific muscle group to target (shoulders, glutes, etc). 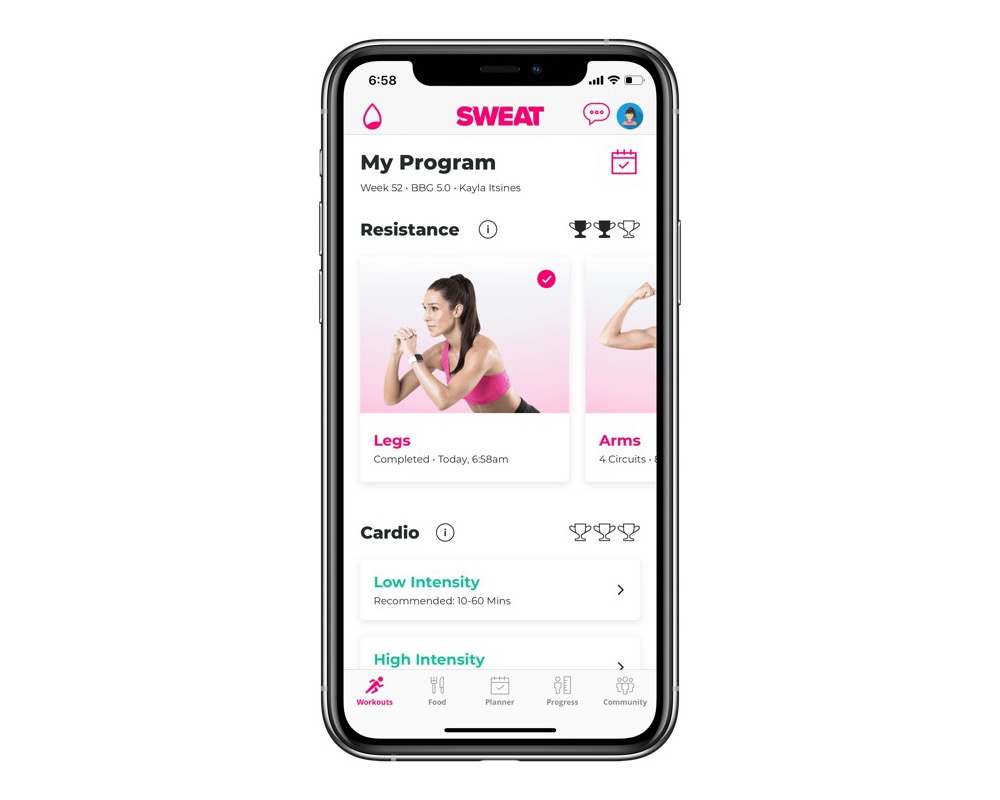 Once you select your targeted area for the day, a 30-minute workout begins. There are two, seven-minute cycles containing four exercises each, and you do each cycle twice to complete the workout. So in each half-hour workout, you are only doing eight simple moves in repetition.

Each exercise is demonstrated by Kayla Itsines on screen as you do them. If you leave the sound on, you hear her tell you in her beautiful Australian accent how many burpees to do (which is pretty much the only way to let anyone suggest you work that hard first thing in the morning). A pleasant ding tells you when your seven minutes is up and your minute rest begins. And at the end of the workout? A confetti party! I could try to salvage some shred of cool factor, claiming to lean into sheer willpower and the rewards of self-discipline, but I already told you about marching band. And Survivor. So I guess you should also know how very happy that animated, falling confetti on the screen makes me each day. 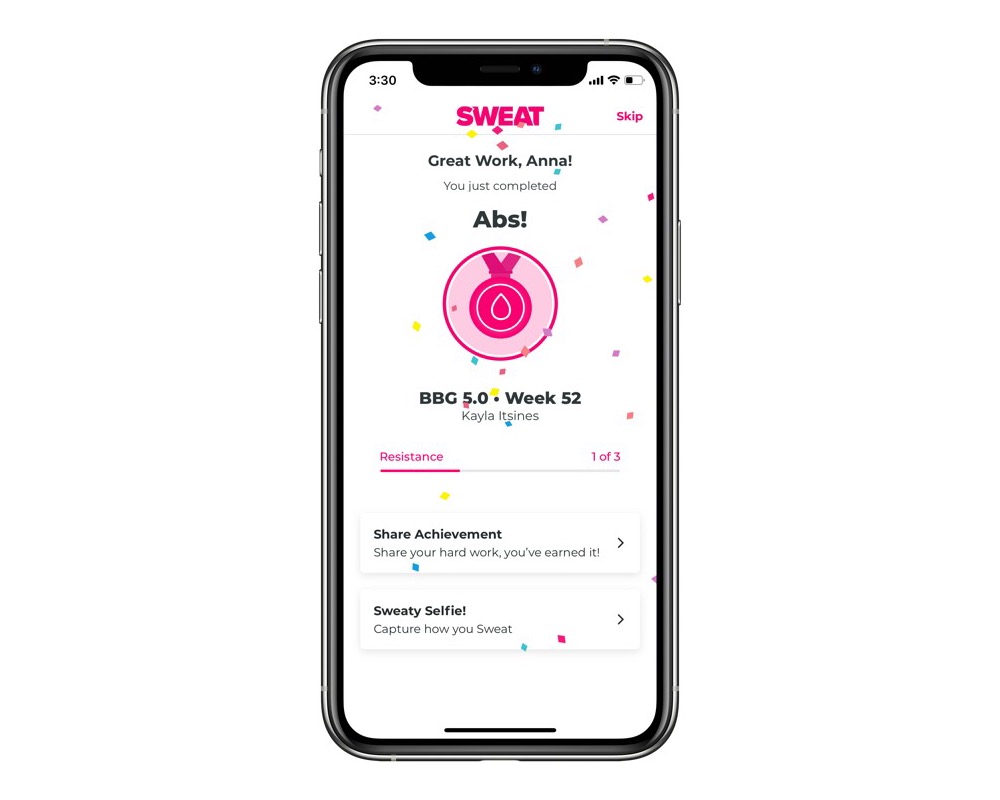 As you progress week after week, the exercises get slightly more challenging, but I never felt it went beyond me.

I tried the adidas Training by Runtastic app before discovering SWEAT, and it advertised the same method: a slow boil of increasingly more challenging movements. However, I found that the app quickly went beyond my ability. I was having to modify movement after movement until I was modifying nearly everything. That felt pretty demotivating. My breaks got longer and longer between exercises, and I eventually found that it wasn’t even worth opening the app.

Another factor that makes the SWEAT app more appealing is its time constraints. Each cycle is seven minutes long. Four cycles and done. The adidas app had a convenient list of what exercises to do as well, but the pace was left up to me (danger move for the non-athlete). You’d think being “timed” would be a pressure I would not enjoy. But instead, and since there is plenty of time to complete each of the four exercises in the cycle, I find that I push myself along because I want to get everything in. Seven minutes? You can do anything for seven minutes. The open-ended cycles in the adidas app made it seem as though I just may be doing up-down pushups forrrreeevvverrrr.

The only hurdle for me in switching from the adidas Training by Runtastic app to SWEAT is the cost. The version of the adidas app I used was free, though free is not helpful if you’re not using it. The SWEAT app is $20 per month, or $120 per year. Before the free trial even finished, I was hooked. I was using it, and loving it, every single day. Sold. 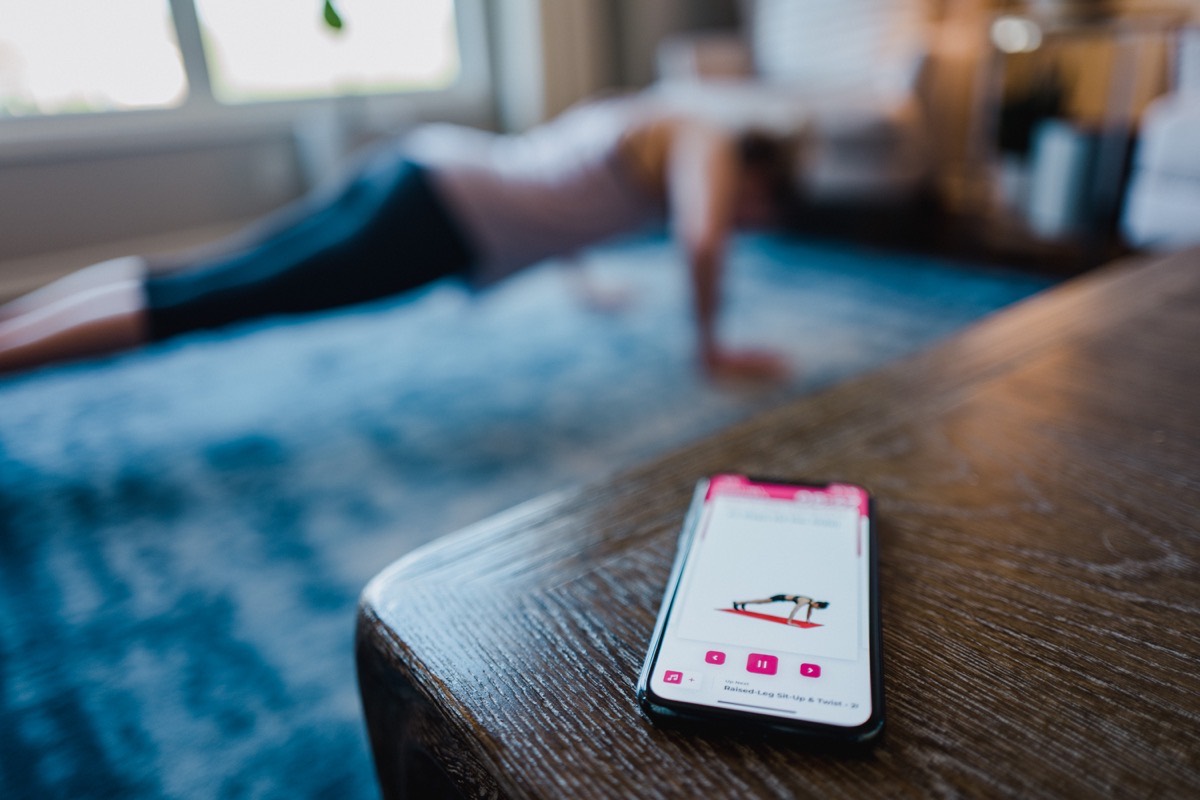 The thing that amazes me about this app is its popularity with people of every athletic ability level. I have seen beginners like me commenting about it on social media alongside body builder types who are taking note of every millimeter in increased tricep definition. How cool is it that there is a diverse community of users with a wide range of goals, body types, and abilities taking aim at one target: health. Mental health, physical health, emotional health. That’s something I can get on board with. Good thing because tomorrow is leg day, and that confetti doesn’t come for nothing!