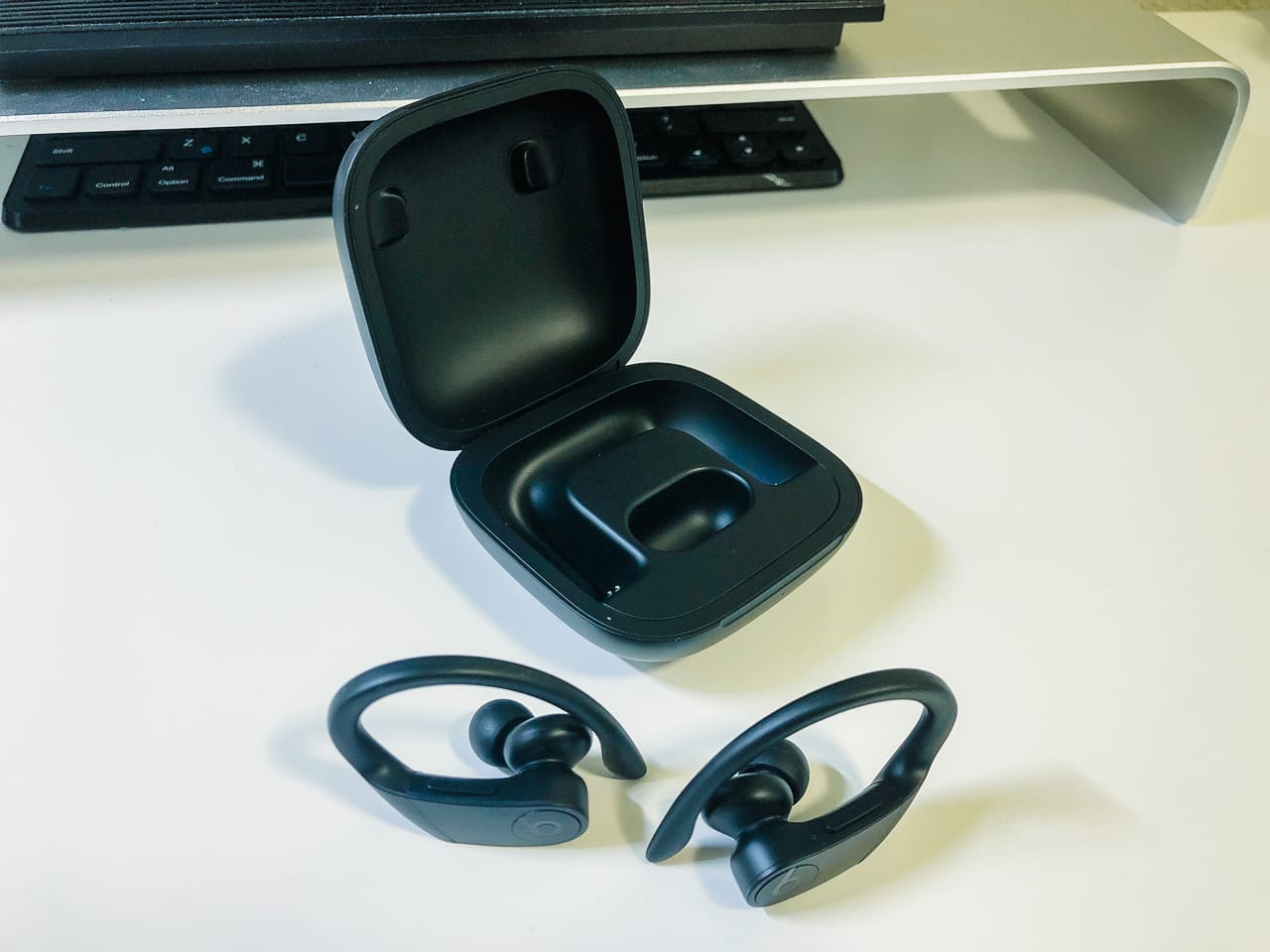 The second version of AirPods have been here for a while, but it is still so easy to think of them as the magical, too-good-to-be-true pieces of tech that we previously could only dream about in science fiction. I, like so many people, have been fascinated by the AirPods ever since they were first announced. Sure, the electric-toothbrush-head aesthetic design is polarizing and a bit unattractive, but the general consensus is that you can easily forget about that once you experience the delight of the AirPods’ usability.

After a brief period, the general public decided to overlook the questionable aesthetics in favor of the convenience and magic of the AirPods. Unfortunately, AirPods do not fit every one — including myself. The AirPods would sit in my ears with careful placement, but the slightest tilt would have them catapulting out. I have found that there are many people who have the same issue. Thus, I was not able to enjoy the convenience the AirPods offer.

Another major feature that make AirPods special is Apple’s proprietary W1 chip. The W1 chip is basically Apple’s improvement over the traditional stereo Bluetooth connection. The chip builds on top of Bluetooth technologies and integrates the ability to easily pair to multiple devices under the same iCloud account. In other words, I could pair AirPods with my iPhone and the AirPods will show as an available Bluetooth connection on my MacBook Pro automatically.

After the AirPods were released, I waited to see if Apple would release an alternative option that could fit me better. In early April, Apple’s Beats by Dre brand unveiled the new Powerbeats Pro to its audio lineup. The Powerbeats Pro are, in short, the old Powerbeats 3 Wireless but without the cable tethering the earbuds. They’re also powered by the new and improved H1 chip, the successor to the W1 chip.

PowerBeats have been in the Beats lineup for a while now, and newer and improved versions have been coming out recently. Apple and Beats have made significant strides in the design area, as the PowerBeats Pro are smaller in size and the ear hooks are more ergonomic and secure. 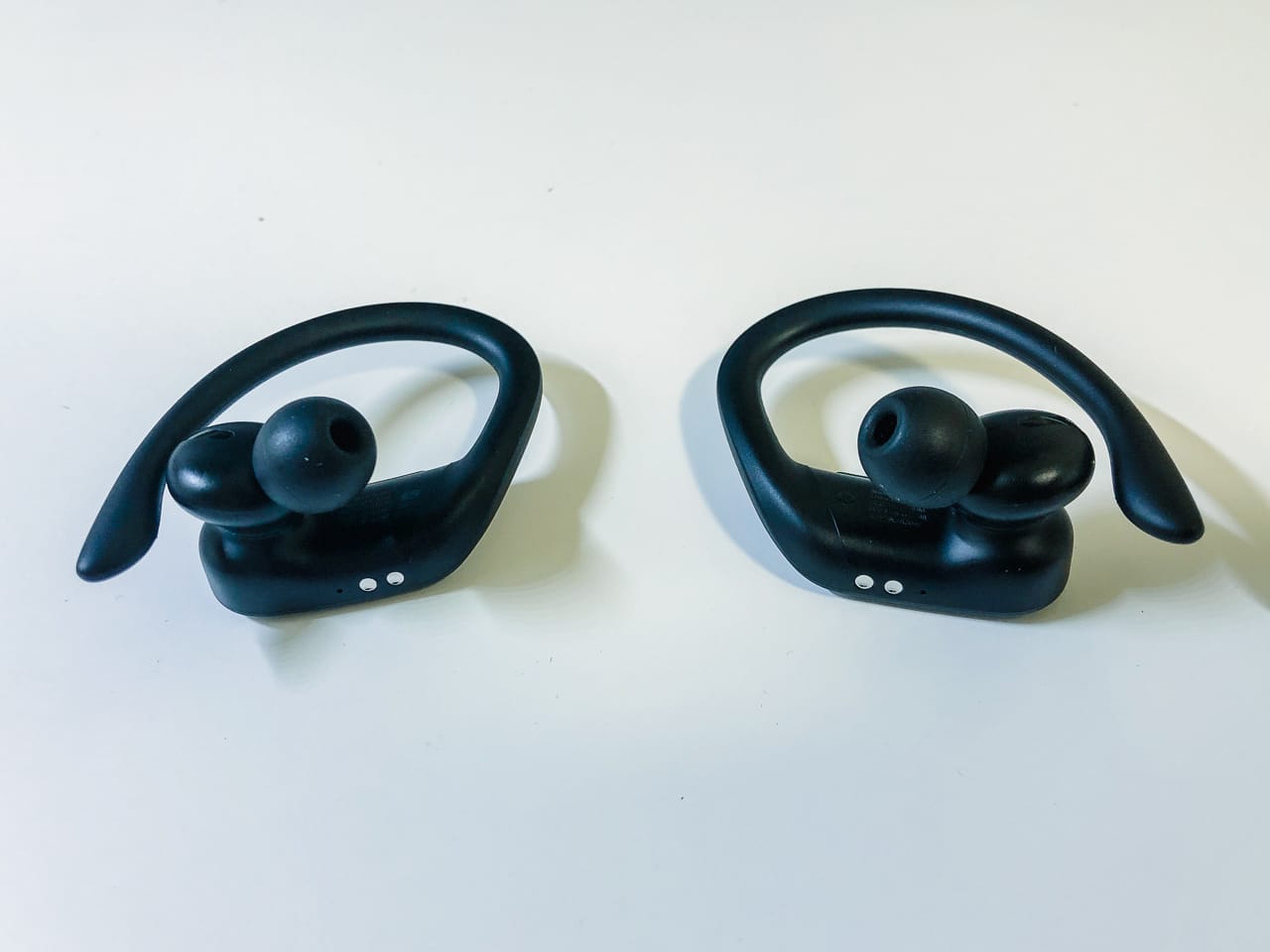 The Powerbeats Pro comes in four color variants: black, navy, moss, and ivory. So far, Beats have only released the black version, with the other color variants slated for later in the summer.

The earbuds themselves are made of plastic, but they feel durable. They have a water-resistance rating of IPX 4, which allows for water splashes and direct contact with sweat. Perfect for general use while working out or if you get caught in a sudden rain shower. 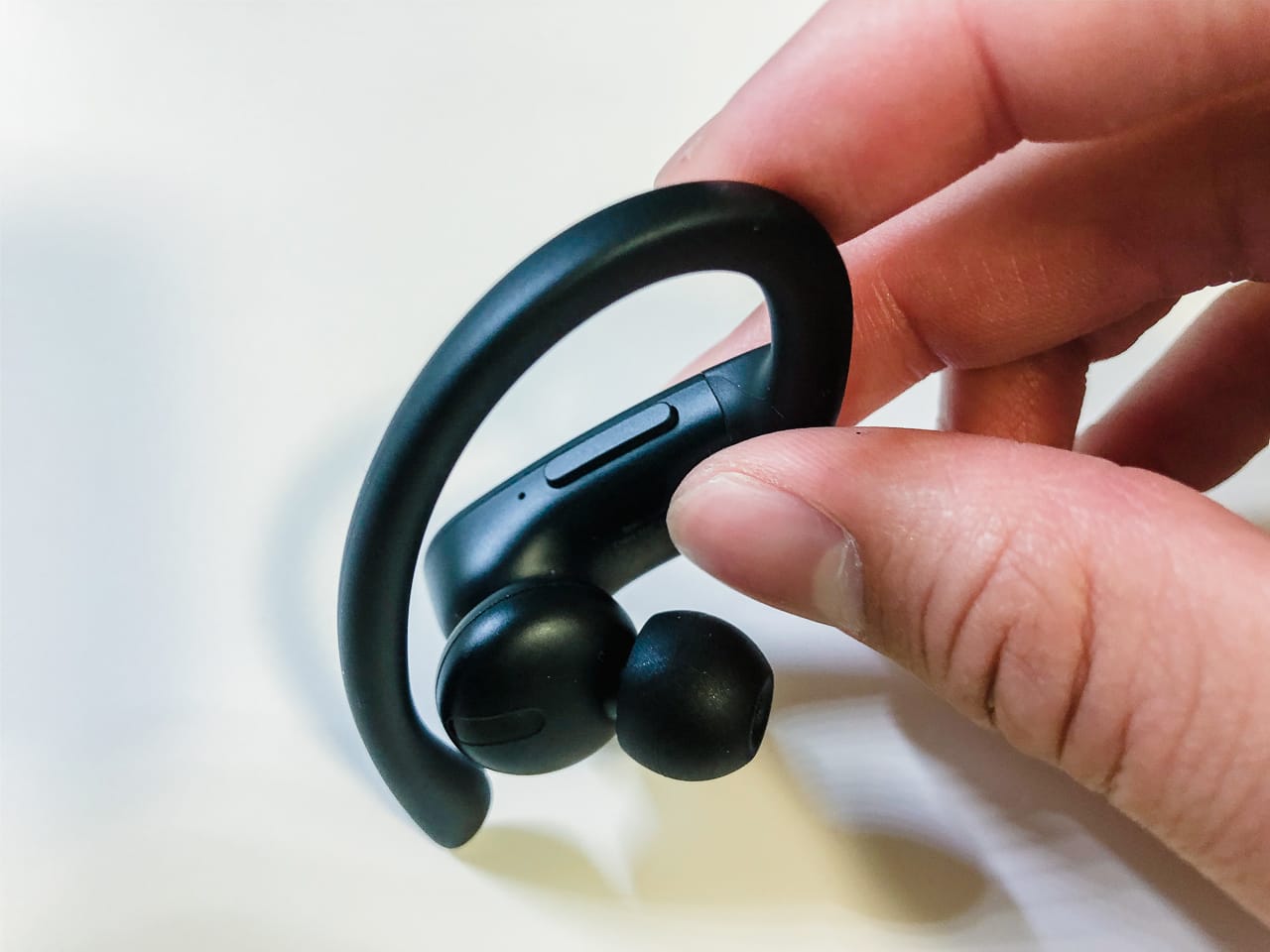 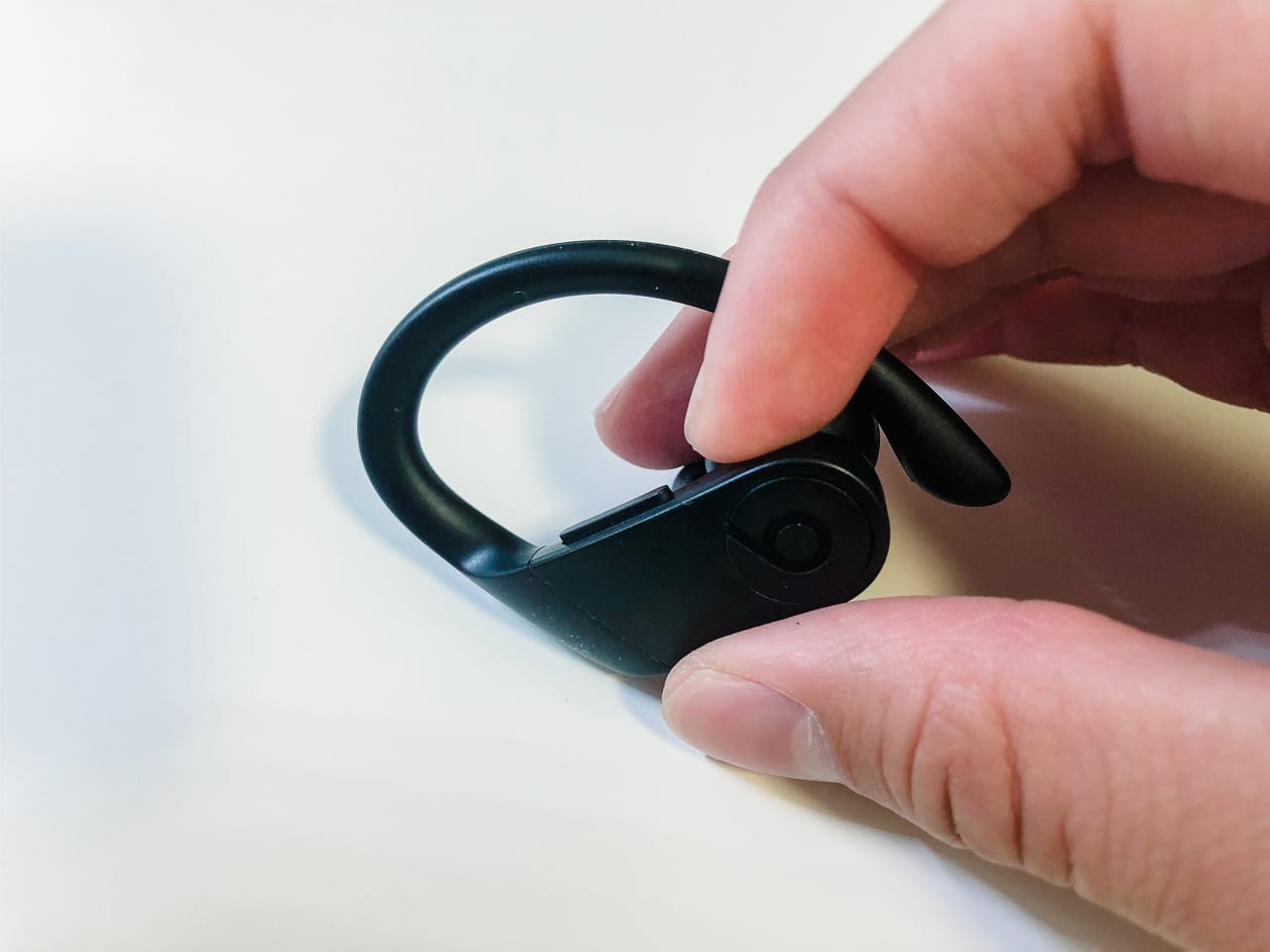 Both left and right earbuds have identical controls and the same physical layout. They feature a nice Beats logo facing the outside that acts as a button for play, pause, skip, and to activate Siri. There is a volume rocker on the top and two silver connection points on the bottom for charging through the battery case.

The Powerbeats Pro come with four different ear tips, allowing you to dial in a proper fit. The sleek design lays flat along the side of your face and doesn’t look bulging or oddly-shaped. I wear these for long periods of time with and without glasses, and I think it’s safe to say that I find them really comfortable.

The earbuds are equipped with accelerometers and optical sensors, through which they can detect when the earbuds are in your ears. This comes in handy when you take off either earbud to play or pause music. The earbuds also move into low power mode if they sit idly in your ears or in the charging case. 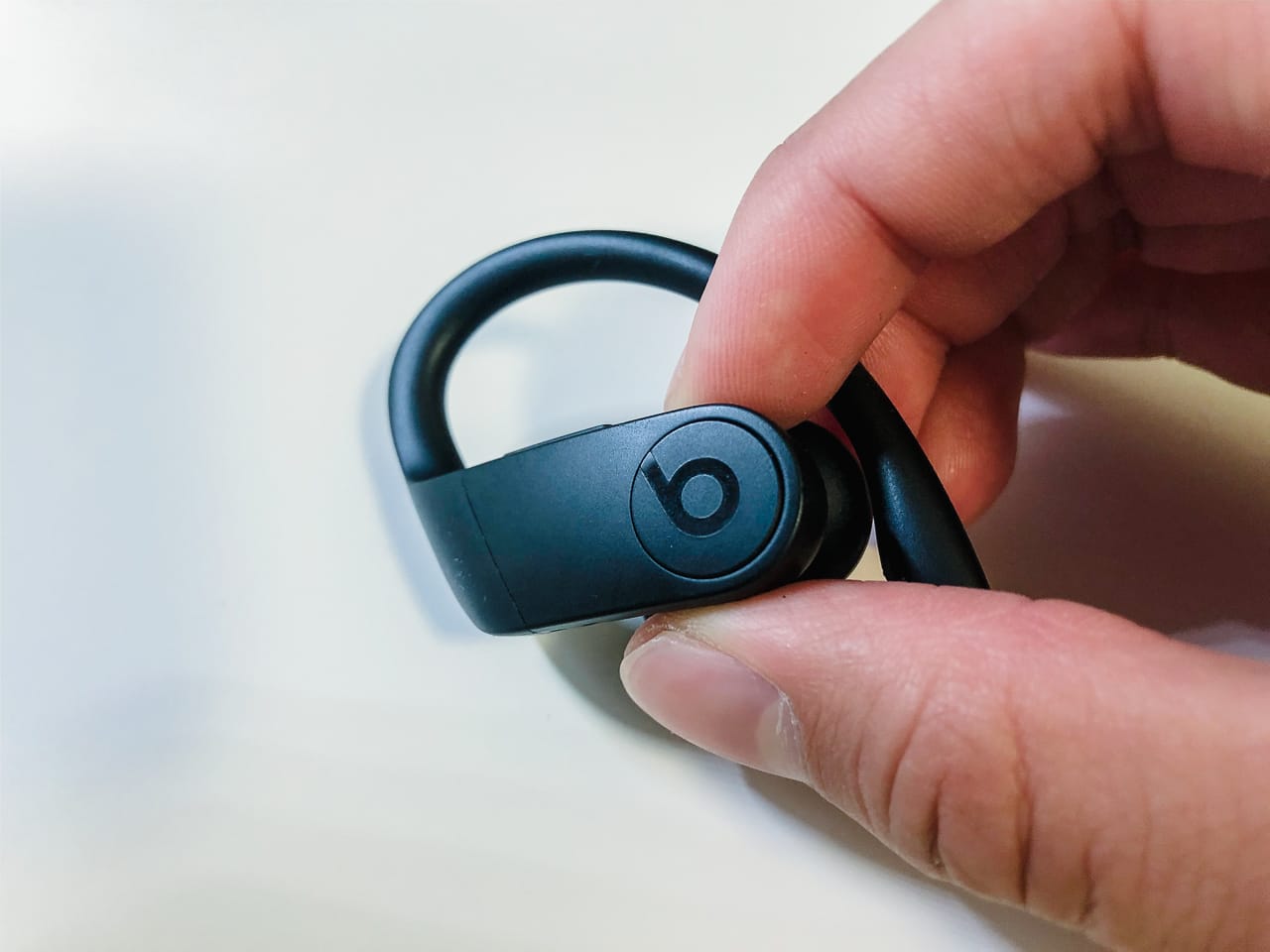 Overall, the sleek design allows for the earbuds to fit easily in a variety of ears. This is my first set of earbuds with hooks, and I’ve found the hooks greatly improve the fit and comfort in my ears. 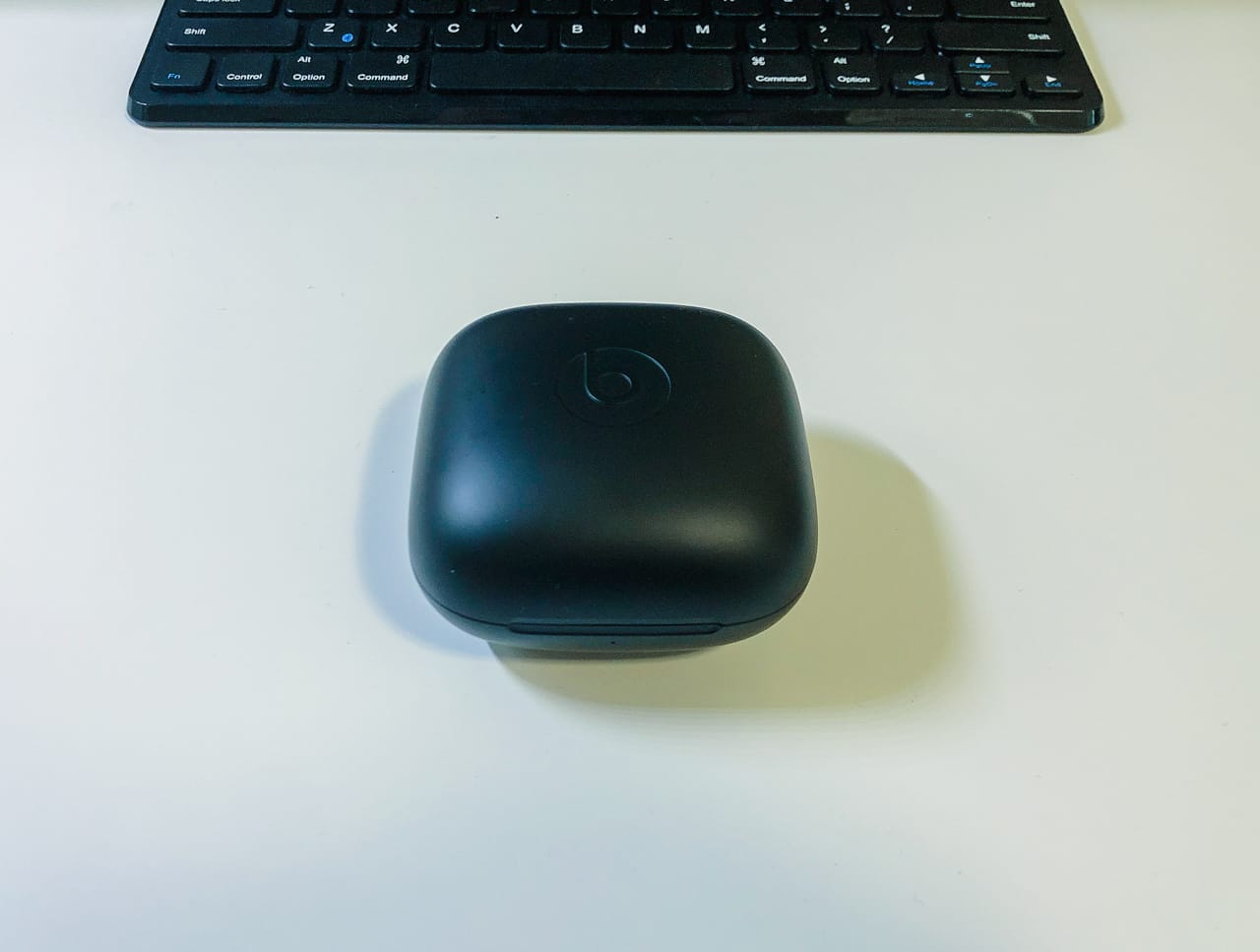 The charging case is massive for the earbuds. It’s a clamshell case that the earbuds slide into and secure magnetically, aligning with the charging connection points. The small button at the bottom when you open the case is used for pairing a new device if needed. 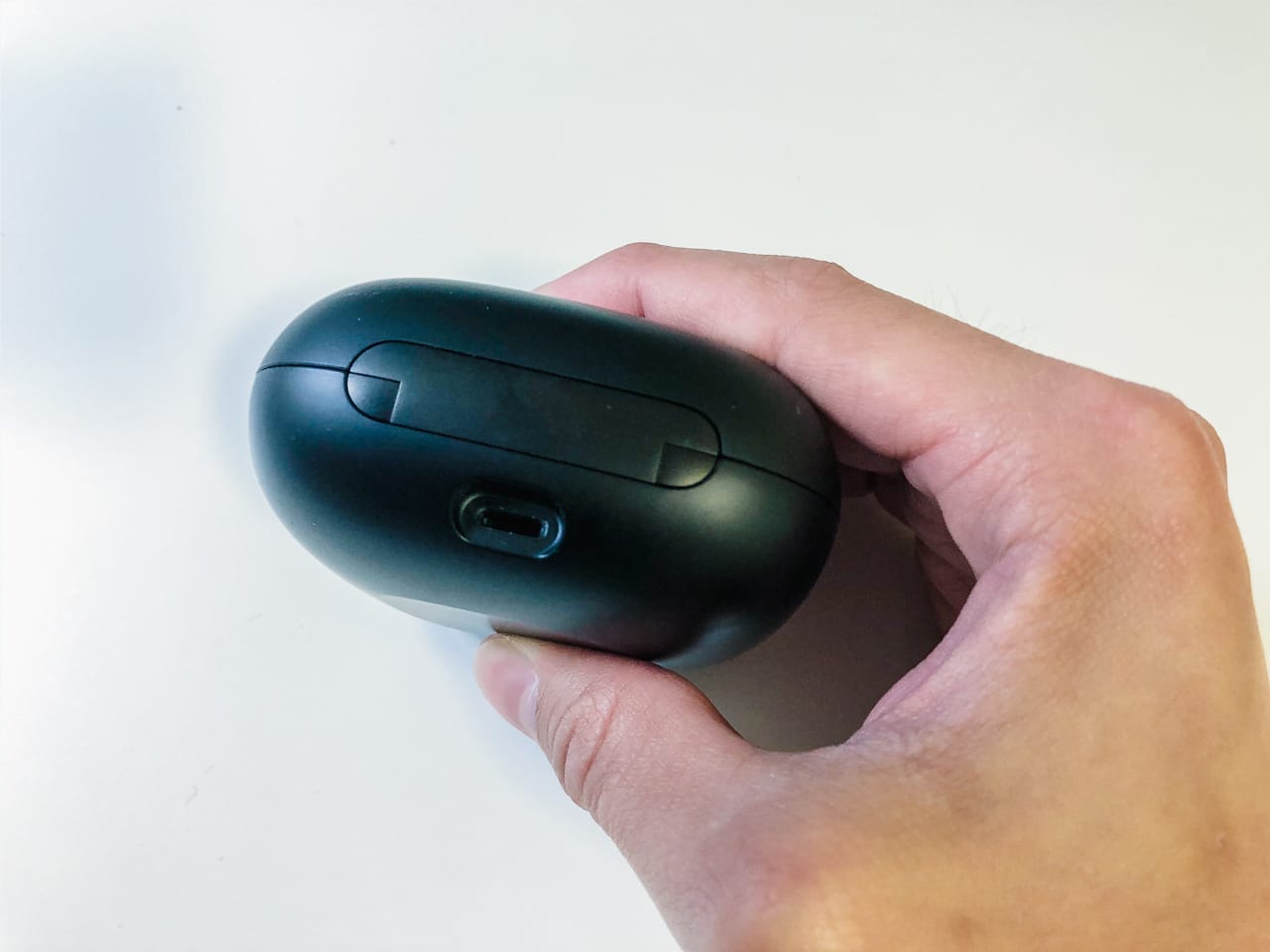 The case has a matte feel with a subtle Beats logo on top and a lightning port for charging at the rear. The product also comes with a black lightning to USB Type-A cable. Unfortunately, no USB-C charging is available. 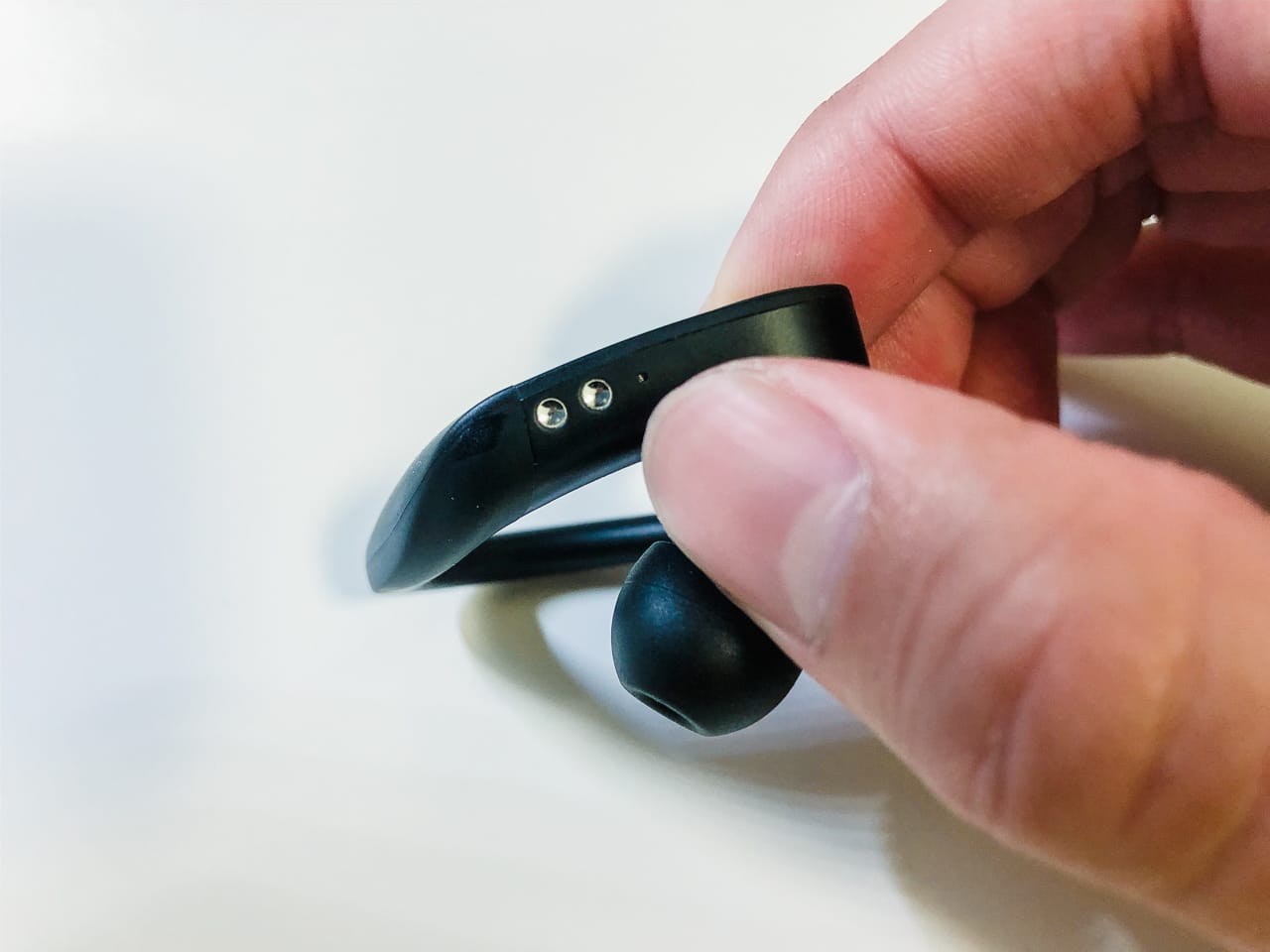 The convenience of the lightning port on the charging case makes it so that whenever I’m finished charging my iPhone, I just plug my charging case in to juice it up a little. The common connection point is extremely convenient.

Beats have been known for creating audio profiles with deep bass. Throughout the years since Apple acquired Beats, the audio profile has slowly shifted to a more balanced profile, which I personally enjoy when listening to a wide range of music. Further, the nice seal of the silicone tips provide excellent isolation from the surrounding environment when listening to music.

When first using the Powerbeats Pro, the pairing was easy — you flip open the case near your iPhone, and the connection screen pops up on your iPhone screen. With that, I could easily hop onto my Mac to change the earbuds’ source and quickly switch between my phone and Mac.

Although the Powerbeats Pro feature in-ear silicone tips, they do not have active noise-cancellation.

When comparing the Pros directly to AirPods, the Pro’s sound quality is definitely better, as music doesn’t leak as much as the open design of the AirPods.

The microphone works perfectly even in a loud environment.

I have taken the Powerbeats Pro to the gym many times and have sweated in them and they still work perfectly fine. Just make sure you know that they are not waterproof — only water-resistant — and they should last for quite a long time. 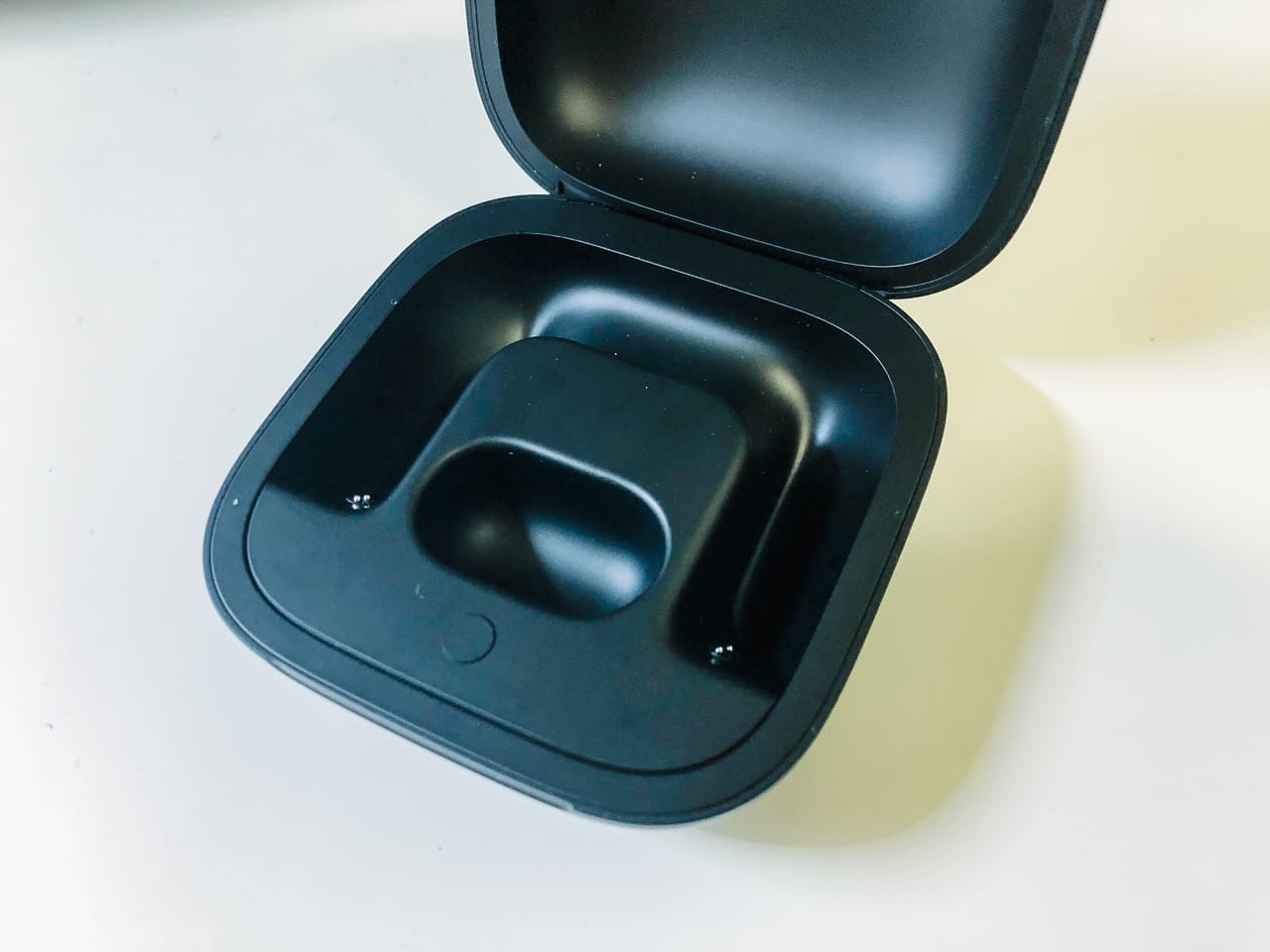 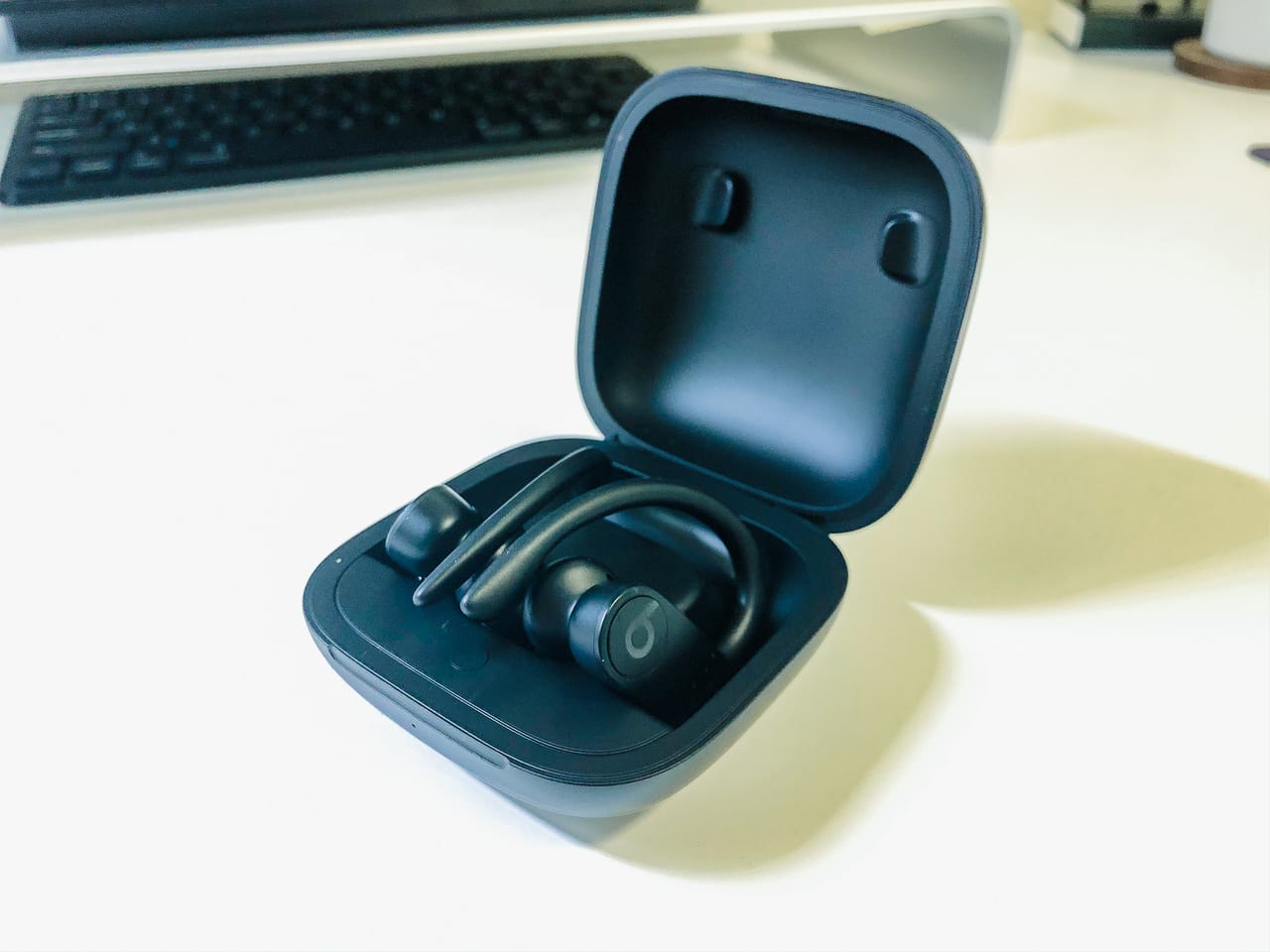 I don’t really think about charging my buds that much until I feel like they should be charged. I haven’t had any trouble running out of battery when I need them. The charging case makes topping them off frequently a no-brainer, just like the AirPods.

The new H1 chip allows the Powerbeats Pro to support the “Hey Siri” functionality, similar to the latest version of AirPods. While wearing the Powerbeats, I can simply speak to Siri to run shortcuts, ask Siri to text or call people, or get a quick rundown of my appointments — all without using my phone.

One of the first things people will notice with the Powerbeats Pro is the hefty price tag of $249.95. The newest Apple AirPods lineup with the same H1 chip is $159.00 and $199.00 with wired charging and wireless charging cases, respectively. This is obviously a significant spike in price, but the Powerbeats Pro actually fall within the price range when compared to other similar wireless products on the market.

The Powerbeats Pro are an excellent purchase for anyone who wants the convenience of the AirPods without sacrificing fit, audio quality, battery life, or durability. 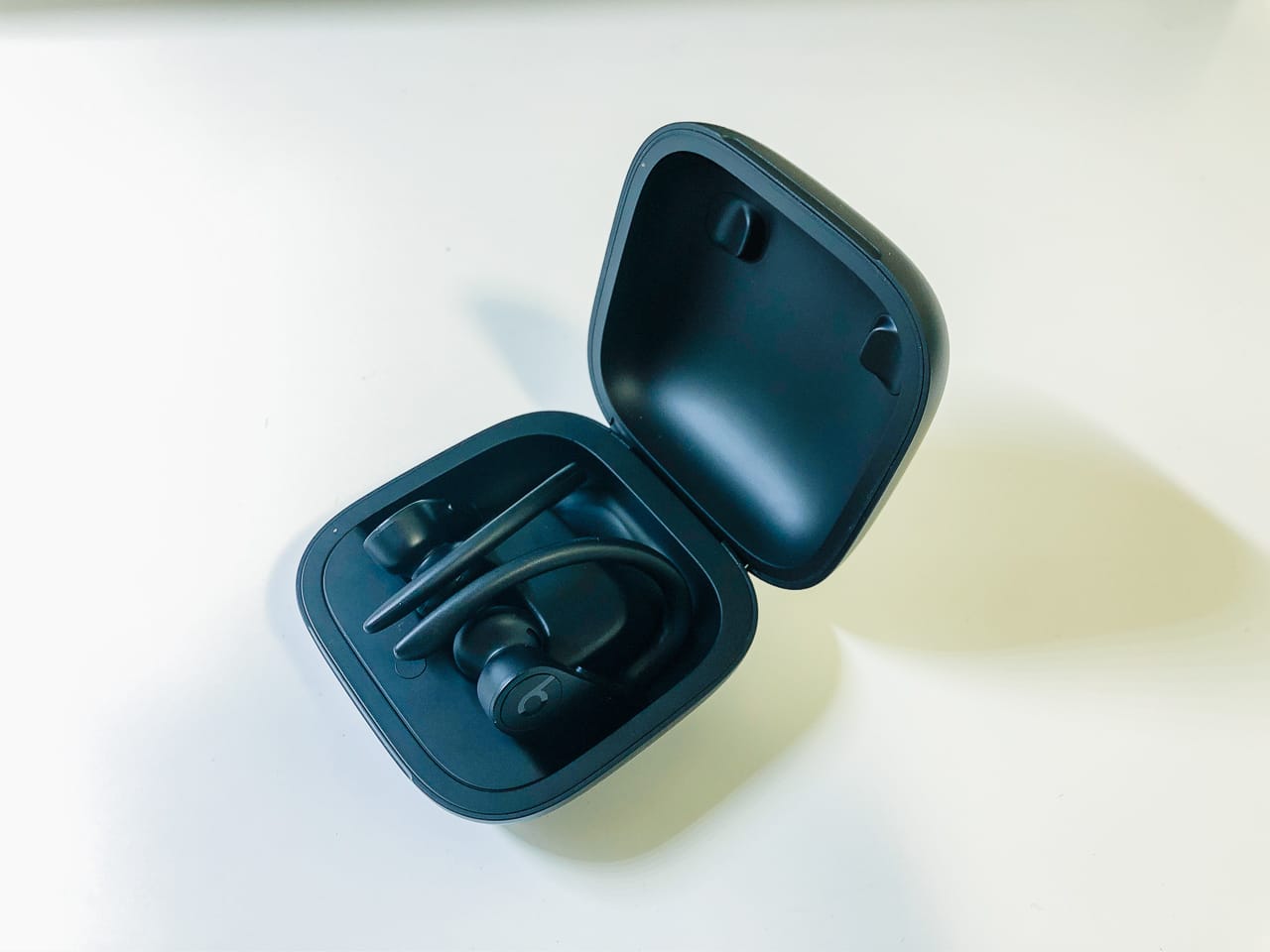 The charging case is really big in my opinion. I could fit it in my pocket, but I find that a lot of the times I leave it in my backpack and if I need to store the buds somewhere, I either slide it in my pockets or toss them in a small compartment in my backpack. I’d appreciate an option for a smaller, more pocketable case for the times when I don’t want to lug around the large charging case, or at least a non-charging case to simply keep the loose earbuds secure.

The Powerbeats Pro have replaced my BeatsX and I think I will be sticking to these wireless earbuds for quite a while. It’s really impressive how Apple have improved the Beats line and shared the H1 technology chip to provide that magical connectivity that still feels futuristic when I use them and switch between devices. While the Powerbeats Pro will work with any Bluetooth device for listening to music and making calls, you only get the full functionality the new H1 chip has to offer while using them with an iOS or macOS device. If the AirPods don’t cut the mustard for your needs — maybe they don’t fit your ears snugly enough, or you want more noise isolation — the Powerbeats Pro headphones are an impressive and well-made piece of tech that will serve you well.